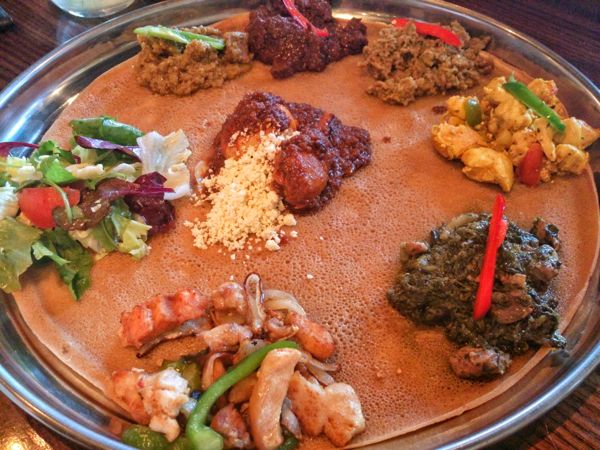 At the top of the Brixton Road there is a little outpost of North East Africa, nestling just between Oval tube and the National Theatre costume and prop store. Established in 1996, Adulis has been serving traditional Eritrean cuisine and bringing the flavours and eating traditions of this tiny country to SW9 – opening a second branch in Batttersea a few years later – and establishing themselves as a destination for those looking to try something different.

It’s possible not many people would say that Eritrean cuisine was at the top of their list when it comes to dining choices but the fact that Adulis has been going strong for the past 15 years proves that it is not only something worth trying but that it seems to work very well indeed. Even on a swelteringly hot Thursday evening just before seven, it was beginning to fill up and by the time we left most tables were occupied. Word has most certainly spread.

The place itself is very smart and relaxed – big patio doors opening on to the street, a cool interior with subtle decorations that make you feel as if you really are in ‘Little Eritrea’, and a pleasant, friendly greeting on arrival. As we waited for the rest of our party we ordered a crisp Tusker beer and had a look at the menu – a wide selection of meat, fish, and vegetarian options which are all served on traditional Injera , fermented sourdough pancakes a little like Indian dosa but a tad thicker, a lot spongier and made from naturally gluten free teff flour.

The most sensible option for a large group is definitely a sharing platter (Eritrean cooking is traditionally based around a gathering of friends and family) so we went for a Nay Wishate meat selection in the hope of getting as wide a range of flavours as possible. While we waited, a couple of plates of Eritrean houmous and some stuffed green chillies provided us with something to wrap our lips around. The houmous was mild in flavour and quite coarse but wasn’t overpowered by any strong additions (sometimes garlic is all I get when I eat it) and came with some toasted flatbreads to mop the whole lot up with – we were soon chasing the remnants around the plate with our fingers. The chillies (Goe S’Nigh) were served raw and stuffed with diced red onion and tomato, dressed with olive oil and a portion of rolled injera to wrap the whole thing up with. Without the spongy, slightly sour pancake the heat was fierce but I was intrigued to discover how the injera acted as a cooling edge to the spiky zing of the green chilli and pretty quickly scoffed the lot.

Our main platter arrived on a huge circular tray, little piles of meaty temptation dotted all over a vast injera with a little basket of rolled up pancakes to use for grabbing devices and extra texture. But here is where the problems started. Exciting though it was to have a chef choose a selection of dishes for us, the staff didn’t seem to feel the need to explain what each one was (they were gone so quickly after serving that we didn’t even get a chance to ask) resulting in a fair amount of guesswork and frantic menu-consulting. One of the dishes had a scattering of cottage cheese or over the top – ‘Oh, none of you are allergic to cottage cheese are you?’ we were asked. Bit late now I fear. Still, never one to shy away from a challenge, I ripped off a bit of injera and made a dive at the nearest pile.

Overall the dishes we had ranged from very nice to merely OK with the Dorho Tsebi (a rich, delicately spiced chicken stew with eggs) winning top marks all round, the Zighni (a hot and fiery lamb stew) coming in a close second and a mysterious (as in I still can’t quite work out what it was from the menu) sweet and tender chicken concoction certainly deserves a mention. There was a confusion of meat and spinach which was a bit greasy although perfectly pleasant and some rather dry chicken cubes with peppers and onions which was certainly lacking. The ‘special dish’ which was poured all over the remaining spaces on the pancake was green and squidgy but had a satisfying and deep flavour. I was looking forward to the point in the meal where we could start tearing apart the giant pancake it was all served on but sadly it was all a bit greasy and unappetising by that stage. I gave it a good go but when my fingers became so slidy I couldn’t hold my glass of wine I had to admit defeat.

The staff were very friendly and service was relaxed (at times almost to the point of being absent altogether) which certainly helped to make it an enjoyable evening. Wine was well-priced (we went for a smooth Portuguese red) and the overall bill was very competitive for a meal for four.

Would I go back? Well, I think if I had friends or family who wanted something different then I would definitely take them to experience it – it’s all about communal eating and is great fun – but I’m not sure it’s what I choose for an ordinary meal out. Should you go? Yes I think you should – it’s a unique and charming place and the cooking were generally pretty good. Just make sure you can get the staff to reveal exactly what it is you’re eating – guessing isn’t everyone’s cup of tea.