Part five of a series in which our Features Editor, Keith Lewis, along with Photographer, Jeannine Mansell, meet some of the residents of Cressingham Gardens. 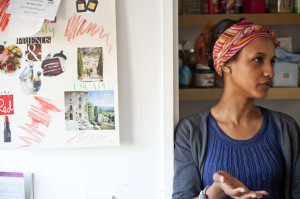 The sun is shining through the high awning windows and onto the table in the living area of Sara’s one bed flat. You can’t see the table’s surface for piles of books ands magazines.

I comment on the amount of light the flat gets.

“It’s one of the things I love about this place,” Sara says. “It’s built for people. Too often architects go for looks.”

Today is the first bit of free time Sara’s had for a while. She had just rushed back from singing in the Ghanaian choir down at Corpus Christi, to speak to me.

“I must admit, I’d never heard of Passion Sunday until today,” she says. “I mean my Mum’s Catholic, although my dad’s Muslim, but neither of them pushed religion onto me. They were very neutral.”

Sara admits that she had initially joined a choir just to please her mum though.

“Then I found myself going every Sunday. As you get a bit older lots of things just start making better sense and I feel more at peace with them. For me, ‘religion’ was just the name given to something that made a lot of sense at that time in history – a set of rules to live by,” she says, shrugging.

Her Mum still lives in Eritrea. But Sara seems to have been crafting her own life in London, bit by bit.

“Before I moved in here I was living in hostels. I’d started out as a refugee, you see. Eritrea was going through a tough time so I came to the UK on my own. I got my definite leave to remain, but you know, that runs out after a while so you learn to live with uncertainty.”

“What did you make of the city at first?” I ask. 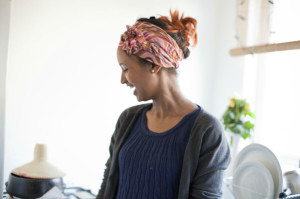 “You soon realise that London is full of people like you. In fact, I loved Brixton in particular. It was the one place I could come and people, other Eritreans, got to know me. Otherwise, it was quite tough. I mean, you feel lost, when everyone around you is doing drugs, drinking. It’s just not my thing.”

It was around then that Sara entered a competition. It was with Storm, Kate Moss’ modelling agency.

“I couldn’t believe it, but I ended up a finalist.”

Sara’s face lights up as she tells me.

“At 5ft 5” though, I was too short though,” she laughs. “Plus I had no papers, I was still going through the courts. But I realised the opportunity I had and I asked them if I could just hang out, bring coffees, do the photocopying, that sort of stuff.”

She ended up chaperoning some of the models, going to festivals and events around the UK and eventually getting to do some maternity cover in accountancy.

“I never called in sick… I didn’t even know what that was until I came here,” she jokes. “So I think the agency grew to trust me.”

But by then, Sara had her indefinite leave to remain and she moved into Cressingham the same month that she started studying psychology.

“I loved that agency,” she adds, but I had to leave. I really wanted to do my degree.”

Sara graduated a few years back but she’s recently been studying to become a primary school teacher. 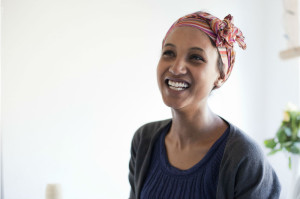 We are now stood by her dream board, which is pinned up in the kitchen. There are some pictures of food – a black forest gateau, or some type of cake. She laughs, and tells me they were the only pictures she could find to cut out. There are also a couple of pictures of rural Italy.

“Oh, I love Italy,” she tells me. “I’ve been millions of times. When I eventually got my indefinite leave, it was one of the first things I did. Left the country!”

We both laugh at the irony.

“This stuff kind of keeps me going, you know,” she adds. “I was used to travelling around when I was younger. Then, waiting for my papers, I wasn’t allowed to go anywhere… I loved Palermo. It reminded me so much of Asmara.”

“You seem really happy here on Cressingham, though?” I say.

“What I love about it, is you know your people, if that makes sense? When I moved in, one of the neighbours, Linda, brought me loads of things to clean up the flat with. Stuff to make it smell nice – it was in a real mess… and she gave me a box of cutlery.”

Then Sara smiles again. “You know,” she says, “I was sleeping on the floor for the first three months of being here. I was lucky getting in though. I was interviewed over in one of the hostels at Camberwell. I think because I was doing a degree, trying to make something work, well… I think that’s what got me in to be honest. Now I pay a pretty normal rent.”

Recently, Sara was broken into. But optimism seems to be a natural state of being for her, and she brushes it off.

”Charles, another neighbour, was amazing. He even gave me a laptop to work with. I guarded that with my life though – it’s one thing having your own stuff stolen, but somebody else’s…”

‘What about those,’ I ask, pointing to the side of the couch.

‘Oh, the toys… they’re here for my nieces. My sister lives in London too.’

She pulls out her phone and shows me two girls.

To see the rest of the series, click here. 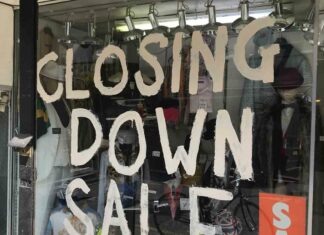 Closure of The Baron menswear shop on Atlantic Road marks another stage in the transformation of Brixton. Once one of several nearby shops selling the...

Council to press on with Cressingham Gardens rebuild

No let-up for Lambeth as housing crisis grows