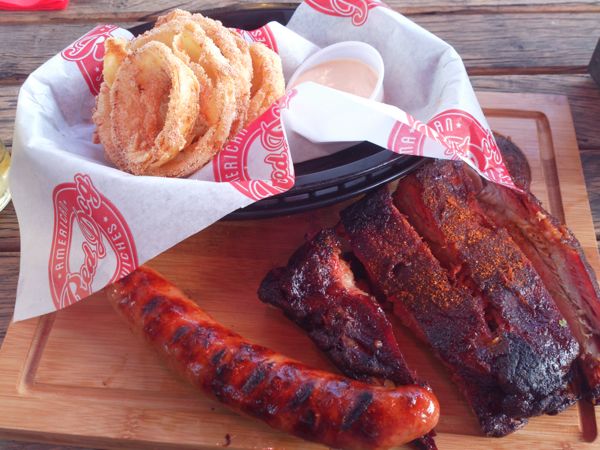 My first three reviews for the Blog were places that started life in Brixton and expanded outwards to the wider world. In the two months since I reviewed the King’s Cross branch, Honest Burgers have opened another new site near Oxford Circus and yet still remain as popular as ever at the original outlet in Brixton Village. All good news. And this brings me to a strange reverse scenario…

Red Dog Saloon first opened in Hoxton Square in the mythical land north of the river in 2011 and have established themselves as a go-to for the Hackney hipsters who want ribs and craft beer, or for the devotees of Man vs Food who want to face the mountainous monster that is the Devastator burger challenge (three 6oz chuck steak burgers, 200g pulled pork, 6 rashers of applewood smoked bacon & 6 slices of American cheese crammed in a bun alongside coleslaw, fries and a milkshake – all to be eaten in 10 minutes). I have visited the Hoxton site and found the food to be, well, nearly very good. The wings were fine but not exceptional, the St Louis ribs were smoky but rather dry around the edges, the onion rings were massive but a bit bland, and my companion’s beef ribs (all one of them) were juicy but generally underwhelming. There was further disappointment with the BBQ sauce which was a bit watery but the flavour was quite nice. The smoked hot-link sausage however was amazing.

All fine. Nothing exceptional but nothing totally disastrous.

Therefore I was intrigued to discover that this little company (that also has a sandwich bar next door) had decided to branch out. And where have they branched out to? Bedford Road on the borders of Brixton – just a stone’s throw from Clapham North tube station and only a few minutes from Acre Lane. I felt it was worth a look and, as Brixton has an excellent BBQ place of its own (The Joint in Brixton Village), see it is worth the small trek out of the culinary comfort zone of Market Row and the Village.

First impressions were not particularly forthcoming – I first tried to get a takeaway and was told it would be an hour’s wait so I left it. My second visit was thwarted by a private function and on my third the place was fully booked but I was told I could stand at the bar if I wanted to. I didn’t want to. However, my fourth visit was a success and I took a seat on the terrace. Hurrah. I should point out that on all of the previous attempts (and indeed on the fourth) the staff were very friendly and helpful which sort of/maybe/slightly made up for the disappointment.

I decided to go for exactly the same choice that I had in Hoxton – BBQ wings to start and St Louis ribs with a side of onion rings and hot-links as a main. After the slight mishap of my starter arriving before my drink (I started regardless) I tucked into the wings and hoped to be impressed. They were…fine. Just as fine as the Hoxton original, nowhere near as good as the ones in The Joint. That ticks that box then. Everything with the mains however was a marked improvement. The ribs were juicy and well-seasoned but still a bit dry and the onion rings were better but still just OK. The BBQ sauce was far superior however with a pleasant zing and kick to it. The hot-links were just as amazing as before. Some of the people on the rowdy table behind me had gone for a Devastator (I don’t think they were doing the challenge) and fell silent when it was brought to them. It did look epic.

As I mentioned, the staff were all lovely – welcoming and helpful and made every effort to add to the experience. It was the opening week when I visited so I’m putting the drink/starter mix-up down to early teething troubles. From a decor point of view it is standard Americana – lots of wood and leather (not in a kinky way) – and the vibe was nice and relaxed but I can see it getting pretty raucous when the place is full. Unlike many new openings these days you can actually book a table but be warned that it comes with a time limit so you can’t settle in for the night. There is an extensive cocktail and spirits list so it would be a good place to start an evening out. Prices are mid to a bit pricy – ribs with two sides of choice is £17.50 but it is a decent portion – but is it worth the walk? Maybe. In summary then, there is nothing to rival the atmosphere and flavours available in the Village but it’s pretty good nevertheless. So if you can face crossing the border – swing by Red Dog South, you might quite like it. A bit.

I may try it again as it is minutes from my front door. We’ll see.

Ain’t Nobody Here but us Chickens 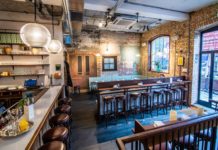 Washing Up: The Laundry

Contributor - 31 May, 2013
5
Dim sum is one those perfect ways of eating. Less committal than normal two- or three-course dining, it is an opportunity to try a...

Nick Buglione - 7 November, 2019
0
Nick Buglione says there is more on the shelves than Jamie and the hairy blokes on bikes. Sooner or later a good cookbook should be...

Nick Buglione - 31 August, 2019
0
She is a sultry, passionate and indulgent femme fatale. Spend some time with the Brazilian Lady, a twist on the classic White Lady. Barrio’s...

Contributor - 19 June, 2019
0
Resident Bugle booze expert Abby Jones unveils her fave summer cocktail. The rhubarb season is short and sour. Enjoy the last of it with this...