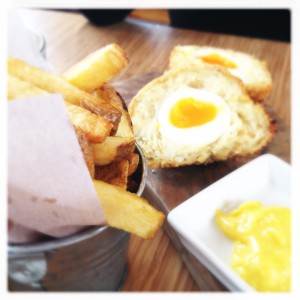 Restaurant reviews are a funny thing. If a place serves great food, often little else needs to be said than just that, and a review is more of a means of getting the word out and whetting appetites with descriptions of tastes and textures. And then there are places that almost everyone knows about. Here, the review takes a different path, as a confirmation or denial of generally accepted expectations. As a food writer, I go into these places with the highest hopes but leave feeling perplexed when expectations are only that and the truth of the matter is that instead of thrilled with a meal, I leave underwhelmed.

The Brockwell Lido Café opened in 2010 to much excitement. It received great reviews and accolades for its food and unique setting alike, and quickly became an attractive addition to the London dining scene. During the day, it is absolutely a destination for mums and dads with kids which, since the birth of my daughter last July, put it on my radar even more. It serves great coffees and cakes, and decent breakfasts. My other half and I have spent many a late morning there, bleary-eyed, propping ourselves up with sugar and caffeine. It is on these assumptions that my friend, my 8-month-old daughter, and I trundled through the Park in the quest for an equally decent lunch.

It is a busy time of day for the Lido Café: mums, dads, minders and the odd student all vying for a handful of waiters’ attention. Though seated quickly, we had to ask for menus after 10 minutes. Whilst we scanned the menu, my friend noted how the setting really allowed for kids but was completely welcoming for those without. A very good point – the Café is light, airy, and modern in feel, yet kids can flick carrot sticks on the floor and no one rolls their eyes.

We nabbed a waiter and, despite his leaving us to attend another table mid-order, we opted for thyme, lemon and garlic marinated char-grilled chicken, which came with two salads of our choosing: cauliflower, toasted hazelnut and raisins; and puy lentil, feta and roasted peppers. We also went for chips and a couple of small plates to share: salt pollack scotch egg; and iberico chorizo, piquillo pepper and rocket on toast.

The chicken was served over the two salads, and though the thigh meat tasted little of its marinade, it was juicy and had a lovely charred flavour. The cauliflower salad was lacklustre and bland. The puy lentil, feta and roasted peppers was perhaps too safe a choice on our part, the lentils slightly too al dente. The iberico chorizo was middling in its piquancy and was served as a measly thumb split in two. Whilst the peppers were nicely sweet, the toast was tough and as a whole it was disappointing. The salt pollock scotch egg was a welcome respite with its crunchy outer shell and salty fish wrapped lovingly around a soft-boiled egg. Both were served with garlicky aïoli. The chips were good, skin on and nicely fried, and made good dippers for the remaining aioli.

I so desperately wanted to like the lunch at Lido Café. Whilst I was grateful for their welcoming nature towards my daughter and her carrot sticks, the scatty service and the just above average food left me wanting more. How it could be after I had heard so many good things of their dinners? Perhaps I should revisit in the evening, perhaps it is the atmosphere that attracts people, or perhaps I should stick to the coffee and cake.

£31 for two, including service

Wheels for Wellbeing looks for votes from Lambeth community

Brockwell Park in the snow