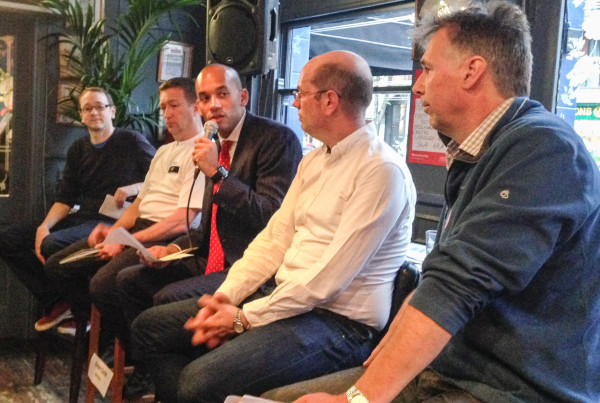 Members of Lambeth’s cycling community gathered at the Grand Union on Acre Lane on Wednesday night for a Question Time-style public meeting. Hosted and chaired by Streatham MP Chuka Umunna, the event was billed as “an opportunity for local residents to raise concerns directly with those responsible for issues such as cycling safety, infrastructure and support”.

Originally intended to take place in the pub’s upstairs space, the event was forced to relocate to the main bar when it was discovered not to be wheelchair accessible. The Shadow Business Secretary, who had been discussing accessibility with the Lambeth Transport Action Group just a few hours earlier, expressed his acute embarrassment.

With stools and microphones rearranged, the impeccably suited Umunna opened by confessing that he himself is not a cyclist. He did, however, offer his mum – on a training camp in Lanzarote with De Ver Cycles so not in attendance – as a proxy for his own absent credentials. 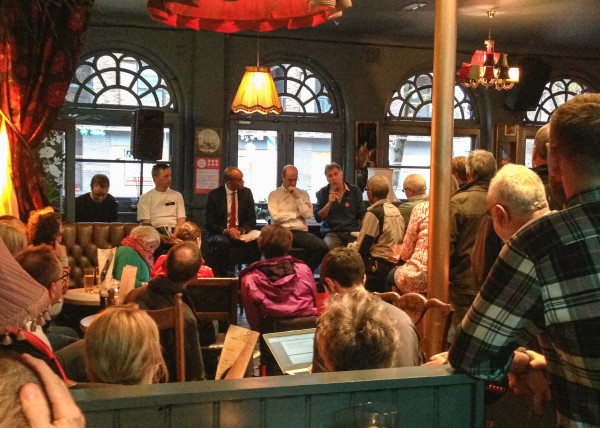 Over the course of an hour the panelists fielded questions from the approximately fifty strong audience covering a wide range of cycling-related subjects, from closing residential rat runs to repairing pot holes to the wider benefits of cycling on public health and the environment.

Charlie Holland commended Lambeth Council on the ambitions of its cycling strategy with its aims for Lambeth to become “the most cycle friendly borough in London”. He also called for more aggressive moves to reduce the number of cars on Brixton’s main roads through measures such as road pricing.

With the Barclays Cycle Hire scheme having been recently extended South and West, Daniel Linkstone asked if Brixton could expect a station of its own in the near future. Andrew Gilligan responded that “the chance is not nil but it’s not likely” due to budget constraints. Having earlier referred to Gilligan as “a breath of fresh air” Councillor Robbins, implying a political conspiracy, suggested that the Mayor didn’t seem to have problems finding the funds for Tory areas.

Towards the end of the discussion epileptic ultra-cyclist Katie Ford raised the issue of mandatory helmet laws. She asked if Umunna would consider introducing a private members bill in parliament to that effect in the event Labour win next year’s election. The MP initially seemed sympathetic to this suggestion until informed that, where such laws have been introduced elsewhere, rather than reducing injuries the main impact has been to lower the number of people cycling.