The family of Cherry Groce, shot and paralysed by police in Brixton in the eighties, will now be given legal aid to have their voice heard at the inquest into her death. 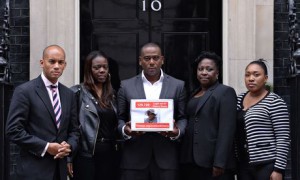 The U-turn comes after a 120,000 signature petition was delivered to 10 Downing Street by her son Lee Lawrence, other family members and MP Chuka Umunna (right).

Cherry Groce was shot by police in a bungled police raid on her family home in Brixton in September 1985, which left her paralysed from the waist down. The incident sparked the Brixton riots.

Ms Groce died in 2011 and the pathologist’s report showed a direct causal link between her shooting and her death.

Chuka Umunna told the Brixton Blog: “It should never have been necessary to mount this campaign but I am very pleased at the decision that’s been made. The Lord Chancellor Chris Grayling has made the right call today.

“It would have been totally unacceptable to have a situation where the police involved with this case were legally represented at our expense at the inquest and the victims, her family should be left without support.”

Umunna continued: “This is not over, we’ve got equality of legal representation at the inquest, but we haven’t got justice yet. Justice will be a coroner’s report that spells out the full circumstances of the events that led to Cherry Groce’s shooting.”

A Ministry of Justice spokesperson said: “Legal aid funding for lawyers to represent the family of Ms Groce at the forthcoming inquest into her death has now been granted. Having considered the request of the Legal Aid Agency, ministers have decided to authorise funding for this case.”

“We hope that this legal representation will help her family and those who knew Ms Groce find out more about the circumstances leading to her death.”

The Metropolitan Police did not issue a private apology to the family until last year. A public apology was issued last month.

Cherry Groce’s son revisits the room where his mum was shot...