Local DJ/Producers Monsters Playground have been putting on CRATES Upstairs at the Ritzy for a year so, I went to meet one half of MP Miles (a.k.a. Wu-Lu) down at Raw Material music studios to talk about Brixtons homegrown Pop-Up vinyl swap shop and music affiliated art showcase and their CRATES 1st Birthday Festival at Brixton East, nicely rounding up this coming Easter weekend. 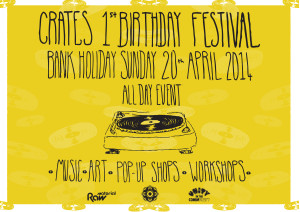 When did you start CRATES?
Last year April 2013

How did you go about it?
I already had this idea of running a night but I was going to America and in need of some money and didn’t know how to do it so a friend of mine said “Bruv why don’t you start it before you go away and I’ll help you run it”

It ran while you were away?
Yeah, because I was away for three months and its monthly. I also ended up doing one in New York.

Similar thing?
It was CRATES the same outfit just called CRATES New York City. We are coming up to our year birthday this month.

Cool, you going to do something special for that?
Gonna be doing CRATES 1st Birthday Festival at Brixton East celebrating all things creative. We’ll have the usual pop-up shops selling records clothes and prints, but we’ll also have live screen printing, breakdance workshops and artwork from artist Barka being exhibited plus the live music and dj sets.

Is that along the lines of just jazz and hip hop?
Not really, on the flyers it says jazz, hip hop, soul funk, boogie, which is cool but the whole ethos behind it is that we’re trying to get people to buy into music. Buying a physical copy of the music and because you enjoy it, your putting back into that community.

So it keeps things going even if on a small scale?
Yeah, but that isn’t saying just hip hop or just funk or just whatever it can be anything. Generally if I like it I’ll play it be it live or be it vinyl it’s that kind of vibe.

Why did you start CRATES in New York?
CRATES is an all vinyl night party so to find people that play similar music to what we do can be a little difficult when everyones producing on laptops and whatever. I kind of coincidentally met random people that were into the same thing, I even met a guy who ran another vinyl night so it made sense to do CRATES there. 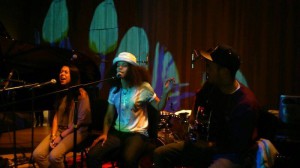 And it was already running over here in Brixton?
Yeah so starting in April still going now and its happened consecutively every month. When we first started it was just an all vinyl record shop. Then it became records djing, record shop and then vinyl swapping. So people came down to trade their double or whatever they might have. And then music affiliated artwork.

What do you mean by music affiliated art?
For example Hector Plimmer the guy I am running CRATES with his girlfriend Emily Evans is a graphic designer, and has exhibited some of her Sun Ra screen printed bags. Also a friend of mine Octavia (a.k.a Melancholy) came and exhibited hand painted records. She basically got old records, spray painted them and just did crazy designs on them and I was just like, “that is dope”

Tell me about the Wu-Lounge that featured at some of the previous CRATES?
I’ve been getting together with some good friends of mine, we go to what I call the Wu-Lounge and just jam for 5 hours. Theres no actual structure to what we are doing but we thought, we might aswell come down to CRATES we’re good enough players to sharpen our tools we might aswell play and make it up on the spot.

So who play’s in the Wu-Lounge?
Myself, I’m playing bass, a couple of brothers of mine one is called Reiss G who’s on keys and synth, Alex The Great he plays keys, sometimes drums, Samii Hagos on vocals mainly. My friend Tristan D who is ridiculously cold on the drums and we got Will Nu-Jazz on the trumpet. We do features on the event, at past CRATES we’ve had Grace El Dabh doing some vocals Sean Skies rapping and then the mic opens up. 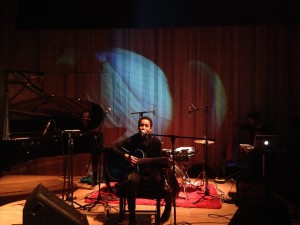 You also do CRATES Live?

Yeah we do primarily live acts two residents myself and Hector playing then after that some bands. Last time we had Pheobe & Nanci, Grace El Dabh, Natasha Alexander then Specs Spectacle and Ramer One.

How often do you do CRATES Live?
We haven’t really got too much of a regular schedule its a one off special every now and then. And we are also thinking about doing another CRATES affiliated event, more focused on electronic beatsy stuff. 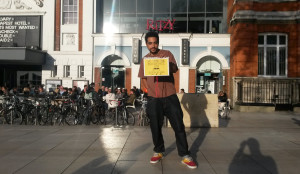 When can we catch CRATES?
Every second sunday of the month and look out for new releases being promoted through CRATES Birthday Festival easter sunday.

You’ll be able to catch Wu-Lu all this week from 5pm around central Brixton “holdin a vibe” with his boombox and spreading the word on CRATES 1ST Birthday Festival.