Brixton East has been transformed into an Aladdin’s cave of photographs, video installations and colourful, hanging saris, creating a veil between the gallery and its makeshift back rooms. This weekend, the arts and community space is hosting an exhibition ‘A Different Mirror’, part of a wider series created by Hana Riaz, from The Body Narratives. Janette Loughlin was at the opening night for the Brixton Blog.

Designed to challenge socially constructed perceptions of beauty, identity, race and gender, A Different Mirror brings together a range of artists’ work in various media forms.

Clare Eluka, body paint artist, has created a series of photographs that are meant to be a colonial representation of the black female body. ‘Exotic Fruits’, depicts a striking female body, reminiscent of the strength depicted in the World War Two ‘We can do it!’ propaganda poster, yet also carrying herself they way Elizabeth Taylor would in Cleopatra; with a tall, composed, walk like an Egyptian stance, naked, exposed and with very, very erect nipples.

This contrasts with ‘Single White Saudi Women’ by Wasma Mansour, and no, that’s not the name of a B-rate chick flick. We see an image of a woman veiled behind her own screen of shisha smoke, sitting in a hoodie on her sofa on a MacBook. 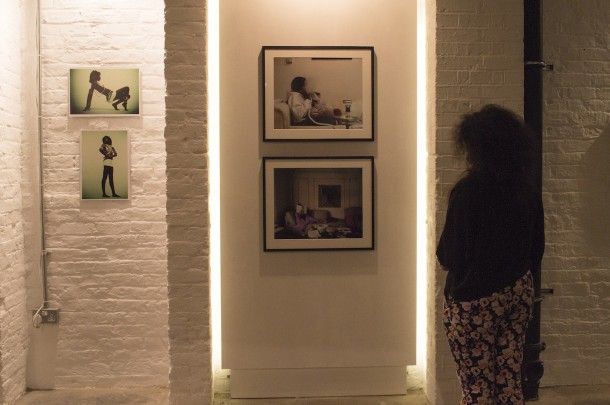 Another image in the same series, captures a woman also poised in her living room, face covered as she’s engrossed in an issue of PAULE KA magazine, an oriental kimono mounted behind glass on the wall behind her. This clash of East and West and of ideals is represented across the installations.

‘The Factory Girls’ documentary made by Chinese artist and social commentator, Aowen Jin, streamed on a series of smart phones mounted on the wall. But to watch, you have to lean right into the screen and let it get up in your face. Another installation belonging to ‘The Factory Girls’ had mobile phones displayed with the viewer invited to touch, press and navigate through the phone.  Press the centre button. Go to Gallery. Press view. And step by step, you’re invited to scroll through a series of intimate portrait shots, and it’s so strikingly personal. So voyeuristic. So thrilling.

One dressmaker and jewellery designer, Sarina Leah Mantle, had work from her Wild Suga collection on display. Bright, vibrant dresses, fashioned in green yellow and orange met with traditional patterns, showing that traditional dress is far too cool for black and white boring. 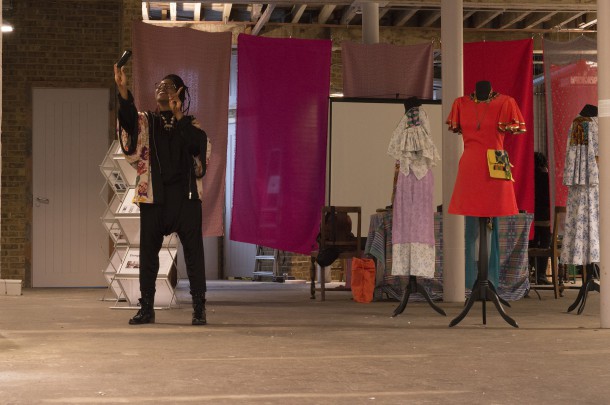 Nasreen Raja experiments with dying fabrics, and has made a series of niqabs based on textures and colours prevalent in family photographs through generations. She dyes fabrics, using traditional methods, such as staining with turmeric, alongside modern printing and digital manipulation.

On the first floor, Beverly Tawiahh performed a set of intimate songs to the crowd, and a series of brown paper postal-wrapped mannequins – a poetry and visual arts installation called ‘Secrets Women Keep’. Each mannequin had a series of personal objects at their feet, one mixing the books Sophie’s World by Jostein Gaarder, young adult novel Looking for Alaska by John Green as well as Kahlil Gibran’s The Prophet.

Speaking about the project’s future, Hana Riaz seemed optimistic. “We want to build the project into more than just a one-off. There’s loads of potential to take this on tour and use it for education. This morning we had girls visiting from a school in Lambeth, and it all really affected them.”

A Different Mirror doesn’t begin to present people with an ideal image of who or what we should be; it simply provides an opportunity for reflection. It celebrates our diversity. Running until  Sunday 27 April. 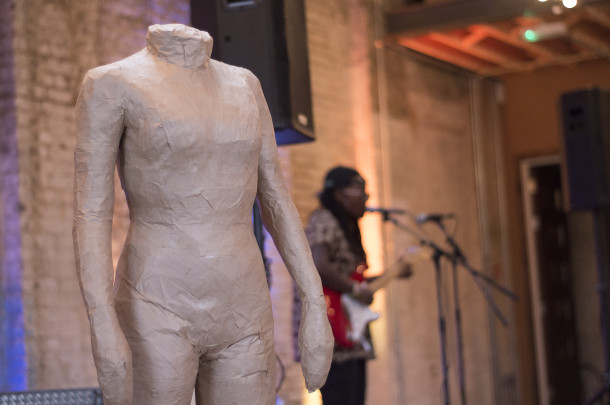 The New Venus: The New Woman event at Brixton East next...

What is Urban? New exhibition opening at Brixton East