Glasses are being polished and tables laid at Brixton Prison as inmates prepare to open the doors of a 100 seat restaurant to the public.

The high-end diner, which is staffed by a number of inmates and several paid staff and trainers, will be open for breakfast and lunch from tomorrow.

Though it’s not as easy as strolling in to some of Brixton’s other popular eateries. All guests go through strict security vetting before being offered a table, and have to leave mobile phones and laptops at the door. 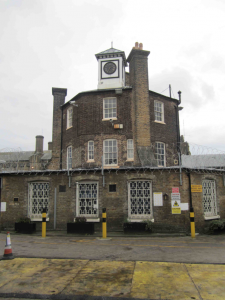 It is the third restaurant in a prison, staffed by prisoners, to be opened by the pioneering charity The Clink, which hopes inmates will use their newly-learnt skills to get a job in the catering industry on their release.

Speaking to the Blog at a launch event at HMP Brixton today, The Clink Charity trustee Lady Edwina Grosvenor said: “To open this restaurant in Brixton, in cnetral London is great. It is easier for diners to get to than our other restaurants.

“Brixton is a local prison, many of the guys who will be working in the restaurant come from the area, so when they get out it will be easier for them to get a job.”

Lady Grosvenor paid tribute to the “great food culture” already in place in Brixton, which she hopes will be a valuable addition to the Clink stable.

The charity has an ambitious target of running ten such inmate-run restaurants in prisons by 2017.

The restaurant, with mood lighting, textured stone walls and leather chairs built by inmates of a prison in Durham, is located in the listed Regency Roundhouse (above), which dates back to 1819 and was formally used as the governor’s home. 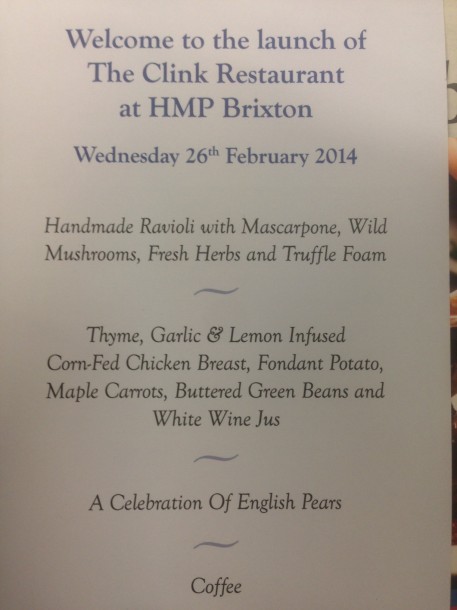 Guests at a launch event this afternoon were treated to handmade ravioli with wild mushrooms, lemon infused chicken with fondant potatoes and maple carrots and a “celebration of pears”. Many of the vegetables on the Clink’s menu will be grown by inmates at HMP High Down, Surrey, where the charity opened its first restaurant.

The team overcame last-minute dramas including a collapsing ceiling and last minute furniture delivery to finish the diner to the highest possible standard. Al Christi, Clink founder and operations director, said: “The prisoners have only been training for two weeks, and only for three days as waiters, and only last night we were lifting the furniture over barbed wire and through windows to get it in. The paint is still wet on the walls.”

Prisoners at Brixton have between six and 16 months left to serve, and those recruited to work in the Clink restaurant during their time inside will work towards an NVQ qualification and be given the vital help of a mentor to help them find work when they are released.

One waiter, Jason, was nearing the end of his eight year sentence for class A drugs offences. He told the Blog he was “nervous” but excited to be working in the new restaurant. He said: “I get out in five weeks, and working in here will help me get a job out there as a waiter. That’s what I want.”

To apply to book at table at the restaurant, visit the Clink website here.