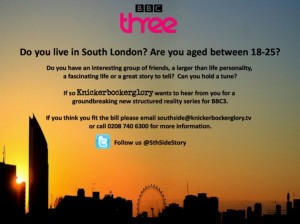 An ‘experimental’ reality show following singers, dancers and DJs based in Brixton is to come to BBC Three.

It will also focus on the love lives and careers of the performers, who will all live in Brixton, the website Digital Spy reported today.

“It’s an experimental new style of storytelling in the reality TV world and is exactly the kind of show we should be experimenting with on BBC Three.”

The news follows fevered debate on social media sites last year at news that a reality TV show called Made in Brixton might be coming to town.

The show will be made by production company Knickerbockerglory, who have now completed the casting process and hope to start filming shortly. Follow the show on Twitter @sthsidestory.

What do you make of the idea?

Help a student with your views on Brixton gentrification

0
Are you a Brixton resident with two minutes to spare to help a student complete her A-level...