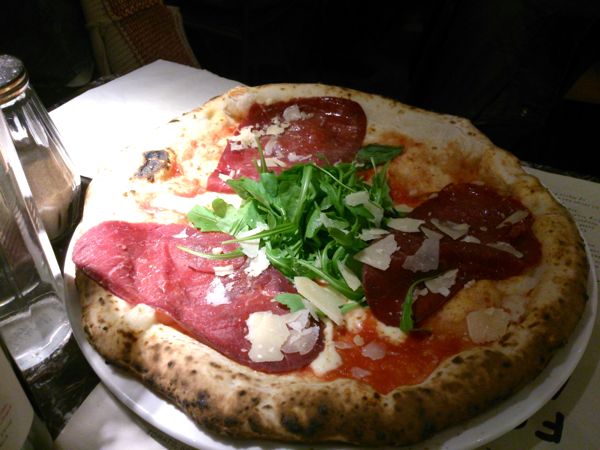 Pizza. Mmmmm…pizza. Charred, chewy dough, unctuous stretches of mozzarella, a tangy tomatosauce, maybe some sliced salami or ground up sausage meat. Or maybe just a fistful of basil to set the whole thing off…

When I think of pizza in London I automatically think of Brixton and the legendary Franco Manca in Market Row. If you haven’t been there, stop reading this right at this moment and go and experience it for yourself. If you have been there then you’ll know what I mean when I talk about the amazing sourdough bases that are covered with top notch ingredients and seared to a wonderful, scorched perfection in the traditional (and genuinely wood-fired) Neapolitan oven. I’ve travelled and worked extensively in Italy and it is no exaggeration when I say that the pizzas at Franco Manca easily rival (and in some cases beat) some of those available in the homeland.

Over the last couple of years, Franco Manca has become a mini chain – opening branches in Chiswick, Westfield, Balham, and Battersea – and the latest opening is right in the middle of town on Tottenham Court road. And that is where my dining companion and I found ourselves early on a damp Wednesday evening in January. I had waxed lyrical about how fantastic the original was and we entered with high hopes – general feedback on the expanded outlets has been good and, after checking the online menu and being reassured that the ingredients would be of the same high quality (not to mention the ancient sourdough starter), I was pretty confident that we would have a fantastic meal.

First things first. It looks like a proper pizza restaurant. I know that sounds obvious but I mean to say it looks like pretty much any other pizza place in the UK –bottles of wine and oil neatly arranged on shelves, a big chalk board, the huge oven dominating the back of the room – nothing wrong with that at all but it certainly lacks a bit of the original’s grungy charm. The service is just as friendly however and we were seated immediately and shown the specials. I noticed that there were ‘Bites’ advertised and our server informed us that these were the starters – not something I’ve seen in Market Row but maybe they’re doing it now too – so we ordered some fat green olives and the Burrata Pugliese.

We were presented with a board on which sat a huge, oozing ball of cheese with salad and some toasted dough. Burrata is essentially buttered mozzarella and is incredibly creamy but what stunned us both was how clean and refreshing it was. Not too rich, not too filling. It was a perfect starter and a clear example of how finest ingredients done simply can and should be the star of a dish. More of that please!

I ordered my usual (I felt as a comparison I probably should) – the no.6 with dry and semi-dry chorizo – and my companion went for the meat special which was topped with bresaola, rocket, and parmesan. Both pizzas were expertly cooked with just the right amount of char and at first glance looked just as good as any I’ve had in Brixton. But – and here’s the thing – I couldn’t help feeling the toppings were, well, a bit stingy. Traditionally pizzas are not overloaded with extras but there were points where I was having to divide up my chorizo so I could eke it out. The meat special looked great but we both felt (of course I had to try some of his too) that the bresaola was a bit overwhelmed by the sauce and cheese, and although it had moments of loveliness it wasn’t quite all there. I also felt both bases were missing something – perhaps because it is a new oven there isn’t as much burnt-on flavour coming through.

It was good pizza – still much better than any other high-street chains – and by the time we left there was a sizeable queue stretching down the pavement. It’s brilliant that the reputation of this little company is such that even more people want to eat there. And so they should. But, for me at least, it is not as good as the original. I missed the mild chaos, the heat of the oven, the generous toppings, the fact that in Brixton it feels like you’re in a pizzeria somewhere down an alley in Naples. This new location is a nice place to eat, the service is great, the food is good, the prices are excellent (the same, in fact, as Brixton and that is impressive), but if you really want to experience Franco Manca at its very best then take a trip down to Market Row, you’ll see what I mean.

Zoe - 21 March, 2010 2
The windows steam up in Etta's Seafood Kitchen when the cafe is full. Somehow that sums up what Etta and her daughter provide in...