Who is Brixton? is an exploration of the streets and characters of Brixton through photographs. Getting past the myths and the reputation, gangster or hipster, Jasmin Hudson’s photographs reveal the good deeds and sense of community in Brixton.

The exhibition will be showing Upstairs at The Ritzy from Monday 6 January.

Photographer Jasmin Hudson has been walking the streets, gathering mesmeric portraits of the people and places which make Brixton unique. Jasmin is delighted to be donating all the money raised through Who is Brixton? prints sold will be donated to Brixton’s Soup Kitchen.

Having gained the exhibition space at the Ritzy for free for 30 days, Jasmin has also been working alongside local business Academy Imaging (XEROX) , who have been supplying her with the materials to print and enlarge her images.

Speaking to Brixton Blog about her project Jasmin described the number of “beautiful moments” which she’s been able to capture on film: “One time in particular a blind man walked into a lamp post and a stranger took hold of man by the  arm and steered him in the right direction. That community spirit is such a beautiful thing to see. I managed to capture this… now others can see a good deed and know that there are good people in the world.”

Unfamiliar to Brixton at first, Jasmin and her camera were given a warm welcome: “mostly everyone I have spoken to has asked what the project involves and has been willing to have their pictures taken. It’s an amazing thing to see as it shows that people do care about their community which, in some places, is hard to find.”

Jasmin’s photographs show not only her interest in the community but have a sense of involvement: “I got involved with the Soup Kitchen when I was doing my second walk around. Solomon Smith, the founder of the Soup Kitchen, approached me and asked about the project and whether I would like to take some pictures for the Soup Kitchen. Of course I said yes!” 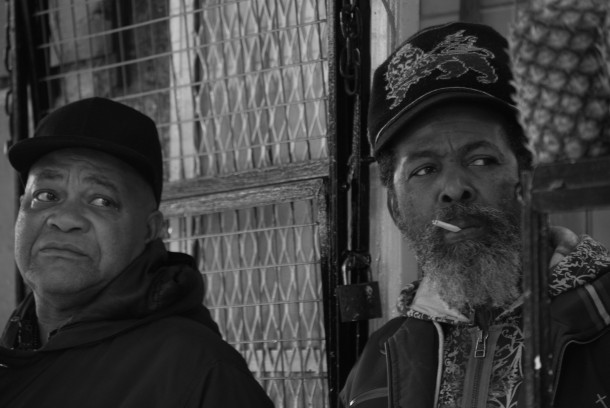 Who is Brixton? launches Upstairs at the Ritzy at 7pm on Monday 6 January. All welcome and prints on sale to raise money for a new van for the Brixton Soup Kitchen.