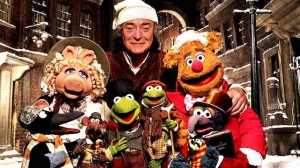 It’s the lead up to Christmas and that can only mean one thing, an onslaught of festive Christmas movies! Black Nativity is a musical drama starring Forest Whitaker, Angela Bassett, and Mary J. Blige about a single mother and her son reuniting with her estranged relatives with musically dramatic consequences.

Aardman Animation’s Arthur Christmas (2011) sees Santa’s youngest son on an urgent mission to save Christmas. Walt Disney’s latest offering Frozen has a talking reindeer, a talking snowman, and princesses, in an adaptation of Hans Christian Anderson’s The Snow Queen.

But the best of the bunch has to be The Muppet Christmas Carol (1992). Not only is it one of the best Charles Dickens adaptations ever filmed it’s also one of my favourite Christmas movies of all time. Featuring Michael Caine in one of his best roles since Get Carter (1971), along with powerful performances from Gonzo the Great as celebrated author and narrator Charles Dickens, and Kermit the Frog in one of cinema’s most poignant portrayals of Bob Cratchit. Perfect Christmas viewing in my opinion.

Based on the children’s picture book by Tom Ungerer, the hand drawn animation of Moon Man looks like an interesting antidote to Hollywood’s constant outpouring of computer generated imagery. And while we’re on the subject of CGI being over used, Martin Freeman still hasn’t found what he’s looking for as The Hobbit: The Desolation of Smaug hits our screens. With a title that sounds like a Manowar album, I’m sure there are enough dragons, dwarves, wizards, elves, and monsters to justify its epic 161 minutes running time.

The enigmatic Cinema Paradiso (1988) celebrates its 25th anniversary with a re-mastered re-release. The story of a young Sicilian boy’s friendship with an aging projectionist has to be experienced on the big screen, and what better venue is there than The Ritzy? Catch it while you can.

But if all this mawkish goodwill is too much to handle there’s always this week’s rep screening of Nicholas Roeg’s classic supernatural horror Don’t Look Now (1973) starring Julie Christie and Donald Sutherland in their prime. Roeg is one of the greatest director’s this country has ever produced – a true visionary – and Don’t Look Now is an absolute classic and an unforgettable experience.

Don’t forget that Blue is the Warmest Colour, Gravity, Kill Your Darlings, Nebraska, The Hunger Games: Catching Fire, Saving Mr Banks, and even Old Boy are still being screened throughout the week, so it’s not as if you’ll be short of entertainment. Happy viewing.