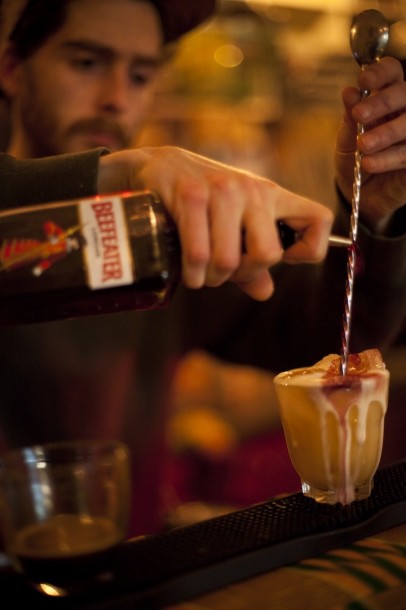 At the end of a night, with half a bottle of prosecco left over, Sean filled up a glass for every customer in his bar and handed them out on the house. I was there with a friend for a late night cocktail after dinner. The act said a lot about his eponymous bar – it’s wonderfully welcoming because Sean himself makes it so; and there weren’t that many people there that night, because on most nights the bar isn’t that full. It’s a travesty, really, because  his cocktails are by far the best I’ve tried so far in Brixton.

Sean’s Bar is the late night version of Rosie’s Deli, serving drinks and  food every Thursday, Friday and Saturday evening. It’s transformed from the daytime deli by moody lighting, a cover over the counter and sexy music. Crucially in these winter months, it’s warm.

The cocktails are clever, never too sweet and very sophisticated. Sean serves classics, from a negroni to an old-fashioned, as well as some inventive specials. He is currently doing a cold mulled wine and a cold ‘hot’ buttered rum for the seasonal drinkers among us, what he dubs “Australian Christmas cocktails”. Cold mulled wine doesn’t sound appetizing exactly, but in Sean’s hands it becomes a delicious, spiced whisky sour with a chilled mulled wine float (see pic).

If you don’t like cocktails then there’s a selection of beers and wines on offer too, but Sean’s Bar doesn’t just do drinks. Aperitif hour is from 6-7pm and in true Italian style, you get a free crostini, bowl of olives or bowl of home-made pickles with your cocktail for £6. And the main courses, which change seasonally, are classic Rosie’s Deli – simple and homely, from salads to macoroni cheese and a croque monsieur.

We have to admit to hoping Sean’s Bar doesn’t become so popular that it turns into an unbearable hipster-fest, but whether for a date or quiet drink with friends, it is the perfect place to be.