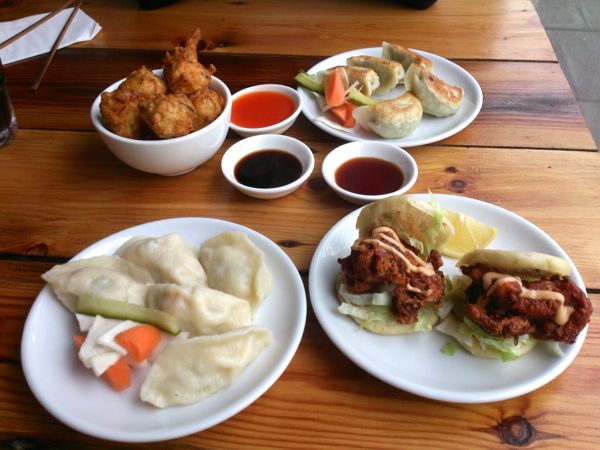 One of the things I often find myself yearning for is some full on, stuffed-to-the-gills, steamy and delicious Chinese dumplings. There are many to be found in London – some good, some rather rubbish (naming no names but a chain in the West End springs to mind) – so it was with great delight that we found Mama Lan in the ever-enticing Brixton Village.

Like everywhere in the Village, it is a low-key kind of place with basic seating crowded around a tiny kitchen. But what a kitchen! Delicate dumplings filled with perfectly balanced ingredients – cooked to order and served in generous portions to be plunged into vinegar, soy and chilli sauce. Needless to say we stuffed our faces and looked forward to a return visit.

Imagine then our feelings of mixed delight and trepidation when we saw a unit on the edge of The Pavement in Clapham with the Mama Lan sign swinging casually in the breeze. Had they moved? Was it a competitor with the same name? What it simply a mirage that was subliminally telling us to get ourselves to Brixton that very minute? It wasn’t open yet so I immediately went online and checked the facts – no they hadn’t moved, and no, it wasn’t someone else. That also ruled out the mirage theory. They really were branching out – albeit in a pleasingly local sense. We waited eagerly and at the first opportunity we zoomed down to get some dumpling-based lunchy treats.

It’s not a huge place – probably only a few more seats than the Brixton Village original – but it is very smart, simple and, just like in Brixton, the staff are welcoming and friendly. So far so good. The menus is pretty similar too – a selection of noodle soups, dumplings and other Beijing street snacks like fried vegetable balls and chicken wings. I was expecting the prices to be a bit higher as Clapham is not a cheap place but having checked the online menu I was pleased to find that there was no increase in price for the food at this new branch. Drinks cost the same too.

But, and here is the most important thing, did the food taste as good? Would the same care and delicate touch be present in this second outpost? I can put my hand on heart and honestly say – YES! We ordered pretty much the same stuff as we had at our last visit to Brixton and we were not disappointed – the boiled king prawn and Chinese water chestnut dumplings were utterly wonderful, packed with prawn and cooked perfectly. The vegetable balls (and it is a huge portion so worth sharing) were crisp and simple but in a very more-ish and scoffable way. They were also insanely hot as they had just come out of the fryer so more beer (tragically) had to be ordered to address the scorched mouth scenario. Ouch. But worth it. I can’t explain how utterly awesome the woodear mushroom and vermicelli dumplings are other than to say GO AND EAT SOME NOW. And of course I had to have some pork ones. Would have been rude not to really.

As we wiped our plates of straggling bits of filling and chilli, soy and other delectables, our server came over with a grin.

We nodded enthusiastically and I mentioned how impressed we were that the food was as good as the Brixton branch – it is a sad but common feature when little places expand that the quality of the food can suffer. He told us that the reason for that was because all the preparation was now done in the Clapham branch because the kitchen was bigger, with a regular ferrying of supplies over to the Brixton branch throughout the day. Brilliant. I was always amazed at how they managed to produce such brilliance in that tiny kitchen, now they have sensibly taken advantage of a new site that not only spreads the dumpling love, but also benefits the original. Such practice should be encouraged in my opinion. And I now have two outlets for perfect dumpings equidistant from my front door. Bargain. 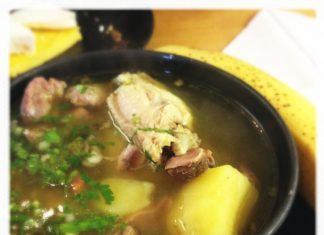 Baking Bad – how pastry power is changing prison lives in...

12 May, 2020
We use cookies to ensure that we give you the best experience on our website. If you continue to use this site we will assume that you are happy with it.OKPrivacy policy