Ahead of its launch, Katrin Magnussen meets the authors of ‘Darcus Howe: A Political Biography’. 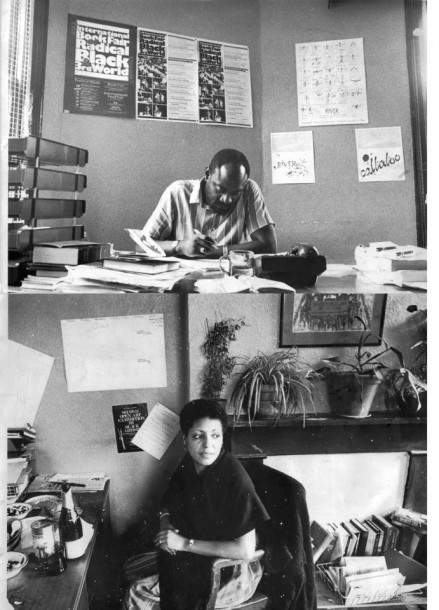 “Every part of his life is exciting,” exclaims Robin Bunce, from a well-worn sofa in Brixton’s Dogstar. “Imagine writing about Clegg or Cameron. It would be so boring in comparison!” he laughs.

The book charts the life of political activist, columnist and TV presenter, Darcus Howe.  It is his life seen through the history of the British Black Power movement. A history which, according to authors Robin, and his close friend Paul Field, has never before been committed to a book.

“We pretend that there was no black struggle in Britain, but of course, this is not true. But, there are no books on it and that was one of the reasons we wanted to do this project, as a historical document.”

Persuading Darcus to be part of the project was easier than anticipated. Once he’d agreed, a global hunt for information on the Black Power and the British Black Panther Movements ensued.

“Darcus had such an amazing life and did so many different things before he even became a TV presenter in the UK,” explains Paul, “so it was a case of travelling both to the Caribbean and the US for the research to find out about the movements he was part of.”

Tracking Darcus’ life in this manner made the authors greatly appreciate his contribution to the black British history and they are in awe of his many achievements.

“We found a story of someone who was always on the side of the angels,” says Robin. “So many dramatic parts of his life would make a good movie – a revolution in Trinidad, the civil rights movement in America, representing himself (and getting acquitted) in the UK’s biggest ever black power trial (the Mangrove 9 trial).”

And if there is a film made of his life?

Paul and Robin started their research in the UK’s National Archives, before being granted unprecedented access to Special Branch files.

“Our initial Freedom of Information requests were turned down, but we lobbied and got a lot declassified,” says Robin.  Many of the findings surprised the authors, such as the special connection that existed between the Home Office, Special Branch and senior judges.

“We found evidence that the Home Secretary was being briefed against Howe and his co-defendants and sought to influence the charges that were brought against them and statements made by the trial judge. The racism goes to the top – all the way to the Home Office,” reveals Robin.

Paul concurs. “The British Black Power movement was deemed so dangerous that there was a special desk within Special Branch called the Black Power Unit, which was feeding information directly to the Home Office.”

However, the notion that the movement was a danger was incorrect, explains Paul. “The Black Panthers carried law books rather than berets and guns; they would be policing the police and help advice those harassed by the police on their rights.”

The authors feel that the demise of the Black Power Movement left a big void in the UK and attribute the progressions within race relations to its presence.

“The Black Power movement provided really great role models for young black people who suffered racism,” says Paul. “The Black Panthers ceased to exist a little too soon; society changed somewhat, but not as much as it should have done.”

Paul hopes the book will appeal to future revolutionaries and young people eager for change. “I want our readers to want to change the world,“ he smiles, adding “I hope that young black people who are politically active will be inspired by this book to want to complete the struggle that the generation before them began.”

Robin’s dream readership includes Russell Brand. “I think there’s a lot in this book that Russell would find inspiring,” he says enthusiastically.

‘Darcus Howe: A Political Biography’ is released on 11th December by Bloomsbury.