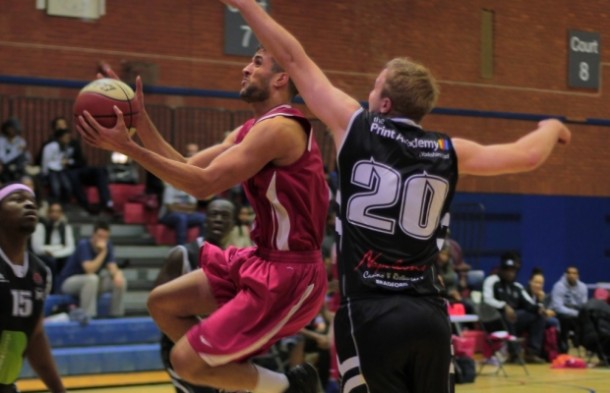 LSBU Brixton Topcats went to the top of EBL Men’s Division 2 with a hard fought victory over the visiting Mansfield Giants. The win took them to a 3-0 record to match the women’s team and stay perfect in the league.

The game was scrappy at the start until the 4th minute when Topcats scored 8 unanswered points to lead 16-7. They maintained this lead until the end of the quarter with Andrej Vaitiekus hitting a quarter high 10 points to leave Topcats leading 22-13 at the first break. The second quarter was more even as Topcats failed to find their rhythm and Giants started to hit their jump shots, at the half it was 35-29 in favour of the Topcats.

The third quarter was a display of long distance shooting from Vytenis Petkus making 4 shots in a row from behind the arc on his way to 14 quarter points at the Topcats extended their lead to 60-45 going into the last period. Giants started the 4th period piling on the defensive pressure and it forced Topcats into a number of turnovers leading to easy Giant baskets as they scored the first 11 points of the quarter to reduce the lead to just 4. This run was halted by another three from Petkus, as both teams them began to trade baskets. As time ran out the Giants had to foul to stop the clock and Petkus made 4 straight foul shots as Topcats maintained their advantage and ran out winners 79-70.

The next home game is for the Lady Topcats against their cross town rivals, London Westside on Sunday November 10 at 2pm.

With thanks to Brixton Topcats for this match report.

Big win for the Topcats