Lucy Binnersley reviews ‘Viva Venezuela’, to be shown next week at the Brixton Soup Kitchen in the Southwark Community Centre with a Q&A afterwards 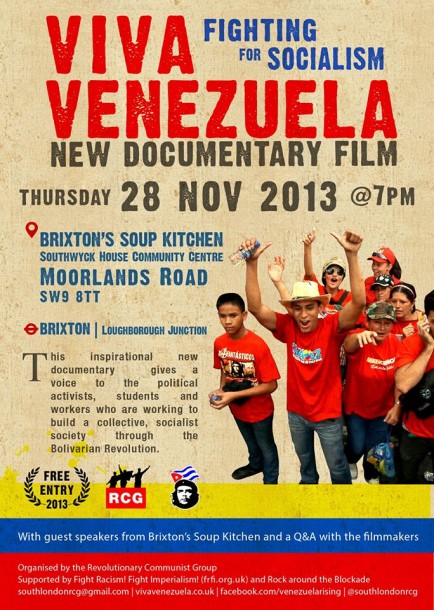 On November 28, the Brixton Soup Kitchen will be screening ‘Viva Venezuela – Fighting for Socialism’, a new documentary film by the Revolutionary Communist Group. The film is an important contribution to promoting and encouraging an understanding of the revolutionary movement in Venezuela, especially in the English speaking world. RCG screenings have already taken place in Manchester, Dundee, Glasgow and Newcastle and its London première saw 160 people pack into the Bolivar Hall in the Venezuelan Embassy. Filmed on the streets of Caracas during the October 2012 presidential elections, ‘Viva Venezuela’ tells the story of the struggle to build socialism in Venezuela through interviews with Venezuelans at the grassroots level.

The film takes you on a journey through the barrios, universities and workplaces to meet the militants, students and workers who are changing their future. Alongside the achievements of socialist Cuba, Venezuela illustrates that not only is another world possible, but this world is being built today in Latin America. As many in Britain still feel the crush of the capitalist crisis, Venezuela, the frontline of the socialist struggle, is seen to provide an example of how the fight against austerity can develop into a fight for socialism.

It unclear whether elements of this struggle could ever be translated into British politics. But it is crucial that we can relate and connect to the Venezuelan cause. Strength through community is the strongest weapon we having against political apathy. In a world seemingly dominated by crisis, imperialist war and exploitation, the essence of local and international community is vital. Despite Hugo Chavez’s death in March 2013, this documentary shows that millions of Venezuelans are still working towards the creation of a society built on collective, socialist organisation and production. In that conscious struggle the spirit of Hugo Chavez and the Bolivarian Revolution live on.

You do not have to be strongly politically active or even politically minded to see the importance of this film. Go to see it simply to be informed of the alternatives available and to gain an understanding of the battle for socialism in the world today. It might change your mind, it might consolidate your existing beliefs for or against Socialism; the most important thing is that it will inspire you to think about the power we all have to change the world that we live in.

COMPETITION: Win two free tickets to One Mile Away + Q&A