“I lived in Elephant and Castle for two years and Brixton was a no go area for me then. Areas always get a bad rep; you have to live there to know them. I live in South Tottenham now which also has a bad rep, but it’s really fine.”

Despite any early misgivings about Brixton, multimedia artist Nicholas Smith decided to showcase his first ever UK solo exhibition, Reflections on Authority at Electric Lane’s Photofusion. “Photofusion is a very neutral space,” he says, “so it was an easy decision to show there. It’s the gallery’s first full AV show, so it was a big risk for us both, but everyone has been so nice, professional and open to new things.” 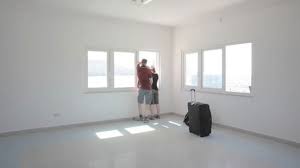 Following its successful British Black Panthers exhibition, which saw the gallery display artworks on black walls, the current show of four large widescreen TVs streaming looped films, sits in a gleaming white space.  The cinematic movements of the films are so slight that only close scrutiny allows you to witness them. The resulting work is quite mesmerising and in an odd way, very calming. Add to that the sereneness of the white gallery walls, the gentle rhythmic sounds and flickering of the screens and the experience contradicts nicely with the surrounding hustle and bustle of Brixton.

“My works have a voyeuristic quality and create a distance from how we actually look at things,” explains Nicholas. He elaborates: “They are images of places of designated cultural spectatorship; people in museums, in sculpture gardens, on viewing platforms and so on. I am taking away that satisfaction of being able to consume works in the way that we have come used to and I slow that process down.”

He has an ambivalent attitude to authority and admits that the show “is talking about systems of display as an authority and is linked to a bigger picture of politics.”  Nicholas states “I love structure, but dislike when that structure is defined by opinion.”

Initially leaving school at 17, his Liverpudlian mother urged him to return to education a few years later, in a bid to stop him ‘going astray’. After dipping in and out of various ‘really rough colleges where young offenders were doing brick laying courses’, he eventually graduated from the prestigious Central St Martin’s and went on to do  a photography course at the Royal College.  “I wouldn’t say I am doing particularly well now – I still have to work in a ‘proper job’, but I seem to be able to realise the projects I want to at the moment, which I couldn’t have done before going there: there is momentum.” 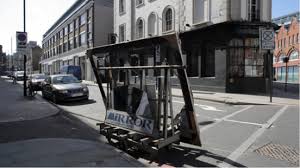 Nicholas prefers to show his work to strangers. “The best audience is always people you don’t know yet. The people you really want to see your work often let you down, probably because of all the expectation.”In addition to the current show, on until December 5, he will be doing a talk at the gallery with guest curator George Vasey on Saturday 30 November. “It’s quite an important little moment for me,” Nicholas says excitedly.

Any advice for any would-be artists out there? He hesitates, and then offers: “Be sincere, don’t follow trends, put the hours in as you have to work a lot harder than most people. If you haven’t got a thick skin, get one quick!”

Nicholas Smith: Reflections on Authority is on till December 6.

Being a woman “Inside Out” at Photofusion