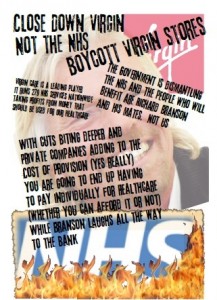 A flash mob against Richard Branson will take place tomorrow outside the Virgin Media shop in Brixton at 2pm.

“It’s all part of a government plot to privatise the NHS, sell it off, and eventually get rid of it altogether. Most people are unaware of this – and they need to know,” she added.

For this reason tomorrow they will sing anti-Virgin songs, collect a ‘penny for the NHS’ and give leaflets to shoppers, asking them to boycott the Virgin Media phone shop.

This action is part of  ‘The Peoples’ Assembly, Bonfire of Austerity’.