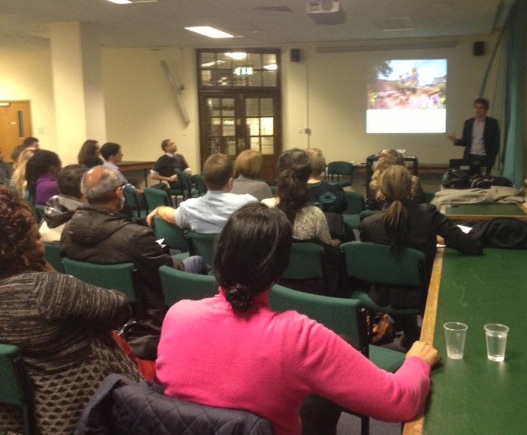 Traders in Brixton have called on Lambeth council to return the site of a temporary ice rink to its original use as a car park.

The council held a meeting at the town hall last night to gather view on what to do at the site of the Planet Ice, in Popes Road, before the area is totally redeveloped in about two years time.

The temporarily chilly venue is due to close next week, when a rink reopens in Streatham as part of the Tesco “hub”.

The site will take until March to be dismantled, and the council wants any “in between” project to open in July 2014. They have secured £40,000 of funding to make that possible, and hope any use of the land would be financially self-sustaining.

Stuart Horwood, chairman of the Brixton Market Traders’ Federation, said: “What we need to remember is what the car park is there for. People need to come to the market to buy their shopping, and they need to get it to their cars.” His colleague, John Gordon, had brought a can of cooking oil and sack of rice to the town hall meeting to show officers the kind of produce people in the market are buying.

Although 22 extra public parking places will be created from the rink’s old staff car park, the rest of the area will be unsuitable for parking, as it will be left as ‘crushed aggregate’, or rubble.

Cllr Pete Robbins, cabinet member for housing and regeneration, said: “This is about making sure people living here now get a chance to be a part of whatever goes forward. We don’t have the money to turn the whole site into a car park – but we want to look at what we do that’s more than just car parking.”

He added: “There will be off street parking as part of any long term development in Brixton.”

Council officer Tom Bridgman introduced the meeting with examples of other temporary uses of sites in London, including Box Park in Shoreditch and other similar “pop-up” ventures, but traders from Popes Road and Station road had other ideas,  calling passionately for the site to be returned to parking before Christmas.

Although others  who may have had other suggestions for the space left, apparently in frustration, discussion at the meeting did eventually turn to what else could be offered at the Popes Road site.

The Market Trader’s Federation suggested part of the site could be used as a “halfway house” between market stalls and retail shops for some of their traders, while others suggested some form of night market for the space.

The chair of Brixton Society, Bill Linskey, asked why Tesco could possibly get away with returning the site as ‘crushed aggregate’ or fine rubble, instead of tarmac. He said at the meeting: “The fundamental issue is why on earth is Tesco, gazillions of pounds, being allowed to hand back the site in such a disgraceful state? It’s a total disgrace.”

The council team have said that all the ideas will be uploaded to the Future Brixton website, and promised to organise another meeting in the next few weeks to set a brief for any organisation which takes the project forward.