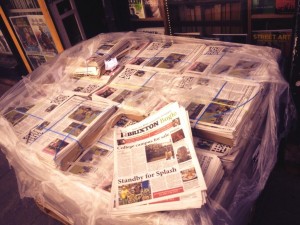 Brixton Blog and The Brixton Bugle have been shortlisted as journalism innovation of the year at this year’s British Journalism Awards.

The awards are run by the Press Gazette and were set up last year to “focus on recognising journalism which is in the public interest AND interesting to the public.”

The Blog and Bugle projects are nominated alongside The Sun+ website, Guardian Witness, the Independent’s Voices in Danger, 360 degree interactive camera, and the Ooh-Ar augmented reality platform.

Zoe Jewell, co-editor of the Brixton Blog and The Brixton Bugle said: “We are unbelievably proud that we’ve been nominated, especially alongside such eminent journalists from established national newspapers. I would never have imagined that the Brixton Blog could achieve something like this when we set it up a few years ago. It just goes to prove the importance of keeping our local news industry alive.”

Co-editor Tim Dickens added: “Our volunteer editors and contributors have also worked an enormous amount to help make this happen and, of course, ultimately it’s all down to the support of the Brixton readers.”

The Brixton Blog was founded in 2010 and relaunched by Zoe and Tim in January 2012, since then it has grown to a monthly audience of over 110,00 hits. The Brixton Bugle, a monthly newspaper with circulation of 10,000 copies, was launched in June 2012 and has become a crucial way for many Brixton and Lambeth residents to keep track of the news.

Winners will be announced at a ceremony at Stationers’ Hall on Monday December 2.

Contributor - 30 September, 2020 0
A postbox on Brixton’s Acre Lane is one of four that have painted black by Royal Mail...

Line up for Brixton Blog Lounge at Lambeth Country Show

31 July, 2013
Go to mobile version
We use cookies to ensure that we give you the best experience on our website. If you continue to use this site we will assume that you are happy with it.OKPrivacy policy