Nicholas Balfe, chef at Salon in Market Row, keeps it simple with a watermelon and mint gazpacho as the heatwave looks set to return for a last hurrah 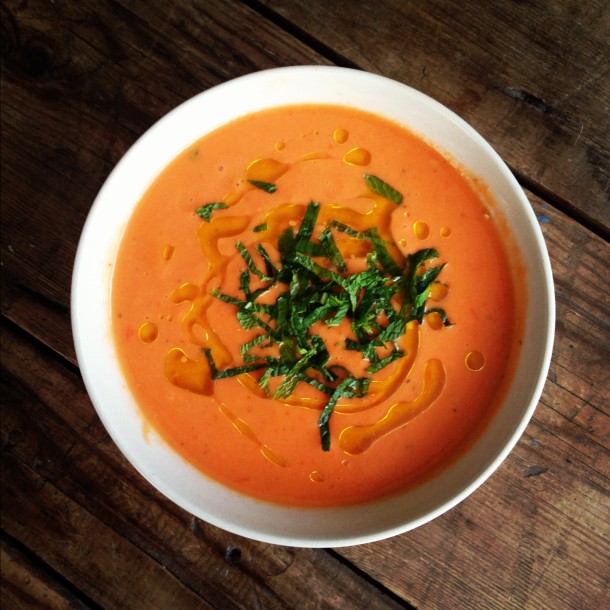 Let’s face it, summer’s not really the time to be slaving over a hot stove. At this time of year, I’m way more inclined to put together a few ingredients that I know work well with one another, and need little or no cooking.

As rumours of another heatwave begin to circulate, there’s nothing I’d rather be eating than a bowl of tangy, cooling gazpacho… This is one of the simplest recipes I know, and relies on ripe, flavoursome tomatoes, which are available in abundance at the moment.

Watermelon may seem like an incongruous ingredient, but it’s actually a great little addition to gazpacho, that I was taught whilst travelling through some very rural backwaters of south western Spain. The sweetness tempers the vinegar kick perfectly.

a quarter of a watermelon

a few sprigs of thyme

a pinch of brown sugar

a larger pinch of sea salt

a handful of mint

Roughly chop the tomatoes and place in a blender – you don’t need to peel or de-seed them. Roughly chop the watermelon, removing any excess seeds. You don’t need the whole quarter, but this gives you some extra to munch as you’re preparing the soup. You want approximately half the volume of watermelon to tomatoes. Add to the blender, along with the garlic, chopped fairly finely, and the leaves from the sprigs of thyme.

Start blending, on a high speed, and add the sherry vinegar, sugar and salt. Check the flavour at this point – you may need more acid or sweetness, depending on the flavour of your tomatoes and watermelon. Blend again on a high speed, whilst gradually adding the olive oil. The oil should start to emulsify into the mixture and thicken the soup slightly. Check the seasoning and adjust again if necessary.

Chill for a couple of hours before serving, then top with more olive oil and finely sliced mint.

Nicholas Balfe is chef at Salon, above Cannon & Cannon, at 18 Market Row.