When Lee Dema began a football club for children from the St. Matthew’s Estate in the summer of 2004, 100 children turned up. There was clearly a need for the club. “There just wasn’t anything for these kids to do,” says Lee.

“Back then there was a lot of animosity between St Matthew’s and Tulse Hill kids,” Lee recounts. “Not a gang thing, just general estate rivalry. But we put a stop to all that.”

How? I ask, sceptically. By having a kickabout? “We moved to a different part of the park,” he says, pointing to the expanse of grass between the tennis courts and the children’s play area. “We said this is now a neutral area. It’s not St Matthews; it’s not Tulse Hill; it’s not St Martin’s.”

Previously the players had been pretty territorial, with kids from St. Matthew’s regarding Brixton Water Lane as ‘their’ side of the park.

“With the gang stuff, I’m not saying you’re going to sort that out with football. There’s been an on-going feud with two gangs around here and we’ve had two young people who played at the St. Matthew’s Project killed, down to that.” But, Lee maintains, the project has helped ease some of the inter-estate rivalry.

“About three years ago when we linked up with St Martin’s Estate, their kids would come down here with a youth worker to escort them, but now they feel they can turn up on their own.”

The project has grown significantly. It now provides coaching to kids from the St. Matthew’s, Tulse Hill and St. Martin’s estate together and next year it will celebrate its 10th anniversary.

But it’s not been without its challenges. When the financial crisis hit, St. Matthew’s experienced difficult times; a lot of funders withheld money. The Walcott Foundation, an organisation that funds Lambeth-based groups, stepped into help. “They’ve been brilliant,” praises Lee. “Walcott released funds and that saved us really.”

The St. Matthew’s Project has been a registered charity since 2011 and now receives funding from Comic Relief, Children In Need and others. All clearly recognise the role the club has to play locally.

Away from the pitches, Lee shows me around the renovated bowling pavilion in Brockwell Park. While it will still be used for the bowling green, it now includes a small classroom that the St. Matthew’s Project hopes to use to deliver training courses to its players.

The club recently partnered with Fit for Sport to help players gain a special NVQ in sports training, which is an Ofsted requirement for those who want to give sports training in schools.

“If they’re up to it,” explains Lee, “Fit for Sport will take some of the players on with apprenticeships or full-time employment.”

“But they’ve got to be up to it,” says Lee as he outlines the challenges they face with kids at the club. “What we’re finding round here is that even with these courses, a lot of these kids aren’t ready for work. They’ve got no social skills, no communication, literacy or numeracy skills. It’s not easy.

“We keep seeing the same problems coming through,” adds Lee. “Some of these kids have got zero confidence, so we get them in at six or seven years-old and start to build their confidence up. They know we’ve got their interests at heart.”

One of those who benefitted is Elmi Mohamud, who grew up on St. Matthew’s Estate and is now a trainer at the club.

Elmi first started playing at St. Matthew’s when he was in year nine at Stockwell Park School, which he describes as a “a notoriously tough school at that time.” Now 20, Elmi is studying English Literature at London Metropolitan University and coaches in his spare time.

He enjoys spending time with the younger players: “Because I’m from the Estate too they feel more open to talk to me. I can kind of challenge them in a way.”

“No doubt St. Matthew’s and Tulse Hill Estates they’ve got their reputations, but I don’t think it’s as bad as many people think it is,” says Elmi. “I like spending time here and telling these guys that the world’s bigger than Tulse Hill and south London and there’s a lot of stuff that they can aspire to.”

I meet Dominic, 10 years-old. He comes to the club every week and claims that even if he could play anywhere in London, he’d still pick St. Matthew’s. He’s a fan of one of the coaches, ‘H’, because: “Every time I train he gives me challenges to complete. Even when I make mistakes, he always helps me when I need him the most.”

As I leave, I ask Lee what drove him to set up St. Matthew’s. “I love football, obviously. I don’t know, I’ve just got a desire to do something, to help kids out.

“I was in trouble a fair bit as a youngster,” he adds. “I know what it’s like. I’ve always said I couldn’t do this anywhere else; it would have to be Brixton. It’s back where I grew up; if it was anywhere else it wouldn’t mean nothing to me.” 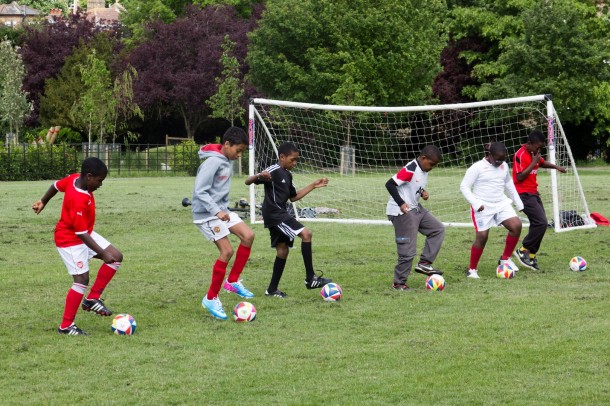 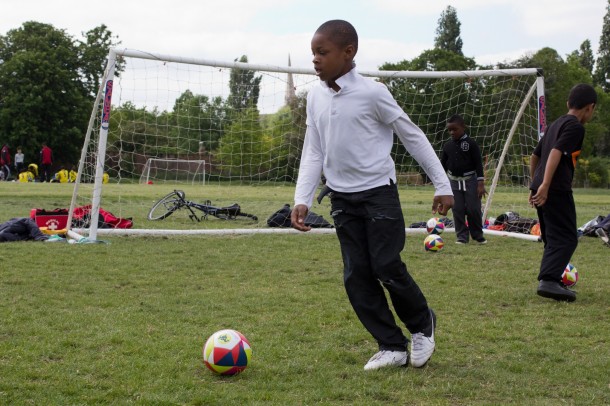