‘The best thing you can buy,’ Abe chuckles, pointing at the translucent polycarbonate roofing above my head. ‘And so cheap.’

I had just commented on the soft natural light in his dining area, where I am sat. Abe is standing in his kitchen in blue all in one painting overalls.

He pours us both a coffee and wanders straight to one of his bookshelves which bulge with literature and art. He picks off a postcard and hands it to me. It is a Le Corbusier design and it immediately explains his open plan home and the unencumbered views of his garden. Somewhere amongst the calculated, jungle-like greenery hides his workshop.

After leaving Nigeria to study architecture, Abe settled in Brixton and that is where his children have grown up. His notions of architecture became disabused, however, having worked for Conran design.

‘It may sound strange,’ he says, ‘but everything was about looking good. I didn’t agree with that. Setting something up just for a moment, a photograph. Click.’

His architectural preoccupation, he admits, is with feeling and making space and not aesthetic. Light is important to him. Hence the polycarbonate roofing.

Now, chatting to me as an artist, he reminisces for a while about his previous work. Abe pondered the past difficulty of working within other people’s structures. Fortuitously, he got a job with The University of Arts but before then it had never occurred to him to make what he calls pure art himself.

‘Art is about communicating ideas,’ he says. ‘If you can’t do that because of some bigger project then what can you do?’

Thus, his art draws from a communal well of values and simple things. His tattoos run downwards from his neck and the length of his arms. I notice a heart and some crossed keys disappearing into the overalls.

‘These aren’t abstract, untouchable ideas,’ he says, noting my curiosity. ‘They are everyday items. These are the things that have power. Most of these tattoos are accessible to anybody, even a child.’

With this in mind Abe describes himself as a folk painter, suggesting that some more complicated art forms lack such power. In fact, the last thing that you think when you talk with Abe is pretence. He goes to great lengths to make his art accessible.

I ask him about one of his paintings that had caught my eye. It is called Atlas. A podgy child, back bent, is holding the earth above his head.

‘I am curious about gestures,’ he tells me. ‘The way people stand and move. This child is playing with the world like it’s a beach ball or something. Let’s put it this way… he’s not bent over awkwardly, carrying the weight of the world on his back.’ Abe smiles a large clean grin.

He talks fondly of Brazil where his family spend some of their time. ‘Brazil has allowed me, us, to choose things afresh.’ Fitting then, I guess, that this is where Abe started out painting – where Abe discovered his new direction.

But it was another Latin American country that was the driver behind his painting that is currently exhibited in the National Portrait gallery. Called The Adoration of Frida Kahlo, it is a tribute to the Mexican artist.

‘It’s not like I have an obsession with Kahlo or anything,’ says Abe. ‘It’s just that I love the way she forged modern art out of adversity.’

Abe considers her to be a folk artist too, despite the interest she has attracted from surrealists. ‘It was all real-life for her,’ he adds, ‘despite how obscure her life actually seemed.’

Seeing as many of his pictures are imaginary portraits, he decided to add himself in, thinking that a self-portrait was more appropriate for the BP Portrait competition.

Abe is also a serious tribal arts collector and that evidently influences his work. ‘Tribal art has a purpose and is not just aesthetic. It doesn’t matter what you believe,’ he says, ‘but to not at least engage with some of these ideas and deities is a great shame.’

On Brixton, he mentions a local deity. ‘It’s called flux,’ he jokes. ‘That’s just how Brixton exists and throughout the years anybody who has come here has had to get used to that. They must get shaped by it. That is why Brixton will always be what it is.’ Abe loves the area now more than ever.

Brixton is not just another linear, stagnating high street, he tells me. It wraps itself around you, all its interesting sidings and alleyways. It has a shape that works. It contains energy.

Abe seems to me to be a great example of the very intrigue and inspiration that hides amongst Brixton’s nooks.

The Adoration of Frida Kahlo will be in the National Portrait Gallery until mid-September. In addition, his paintings are being displayed and sold at Brixi in Brixton Village. 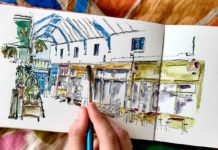 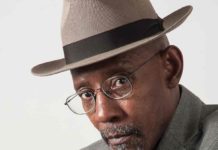 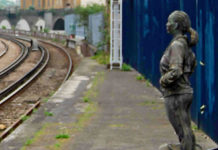