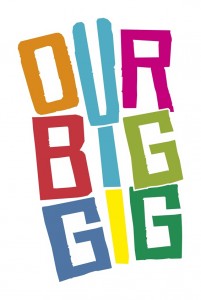 Our Big Gig has included Myatt’s Fields Park in the biggest national celebration of music this summer.

The community music celebration, which is supported by the arts organisation Superact, spans various locations across the UK from July 11th to July 14th 2013.

The music-making event at Myatt’s Fields Park next weekend – Friday July 12th, 1-5pm has been organised by the London-based music collective Stop Look Listen, offering people the opportunity to be inspired by new and existing local talent and take part in music workshops led by community music practitioners.

Will Connor, from stop look listen, said: “The national celebration of music is funded by the Department of Communities and Local Government (DCLG), and inspired by the 2012 Olympics. Set up by a charity called Superact, there are 330 events happening next weekend. At stop look listen we’ve put together, with support from charity, a nationwide music festival with lots of events happening simultaneously.

“The event we’re putting on is four different workshops which are participatory, so you don’t need previous music experience to participate. By the end of the afternoon, those who want to perform can do so.”

The annual event is set to expect over 200,000 people to attend, and attract bigger crowds than festivals such as Glastonbury.

He added: “People who may not have access to music have the opportunity to come along and participate to find out about music making. Music brings people together, and this is one of the key messages; it’s about maintaining the positive impact of the games, and the effect on the community.”

The Camberwell event starts at 1pm at The Bandstand next to the cafe, with various workshops including singing and sound percussion being held at locations around the park. All events are free to attend, and no previous musical experience is required to join in. Find out more by visiting http://myatts-fields-music.eventbrite.co.uk.

To find out about all the events happening throughout the country, visit: www.superact.org.uk/ourbiggig 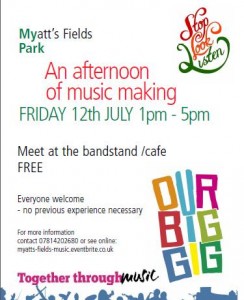