Council plans to boost cycling in the borough have been praised by Boris Johnson’s cycling commissioner Andrew Gilligan.

The plans,  approved by councillors at Lambeth Town Hall last night, aim to encourage a wider selection of people in the borough to use their bikes by introducing a programme which will make cycling safer and more accessible for everyone.

Mr Gilligan said: “This strategy is terrific and Lambeth’s reputation as a pro-cycling borough is immensely enhanced by it. 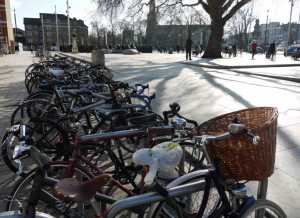 “The Mayor and I are excited by Lambeth’s ambition and we’re looking forward to working with the council to help realise our radical vision for cycling in this key part of London.”

The initiative will form the basis of a bid for a share of the Mayor of London’s £400m funding for high quality cycle routes and supporting projects.

Councillor Pete Robbins said:
“Riding a bike is the quickest, healthiest, and most pleasant way of getting around, particularly on shorter journeys. But too many people – in particular women and young children – are discouraged from cycling due to practical or safety concerns. Lambeth’s ambitious new cycle strategy is about removing the barriers that many people tell us are discouraging them. That could include a need for safe, separated bike lanes and reducing traffic speeds, or just access to safe and secure on-street bike strorage for people living in flats.”

Luke Evans from local campaign group Lambeth Cyclists told Brixton Blog: “We share the council’s vision of cycling being for everyone with cyclists reflecting the diversity of the local population.

“We especially welcome measures such as the borough-wide 20mph limit, the reduction in rat runs and the promotion of cycling to school which will embed cycling in Lambeth life. We look forward to working with the council to achieve the vision of making Lambeth the most cycle-friendly borough in London.”