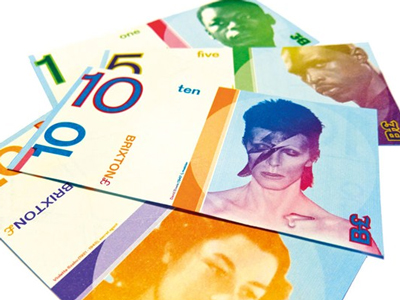 I’m from South Africa, and when I arrived in Brixton five years ago, I immediately recognised in the bustling street markets something of the free-flowing spirit of many informal African economies, co-existing with unusual economic experiments, artists and squats. This general spirit of the informal economy has found its way into my new book, The Heretic’s Guide to Global Finance: Hacking the Future of Money. I’ve also featured some Brixton-based innovations in the book, drawn from four areas in particular.

The Brixton Pound is perhaps the most well-known financial innovation in Brixton. It’s a local currency that attempts to concentrate economic energy into enterprises rooted in the local area, in much the same way as the British Pound inclines the people holding it to do business within the boundaries of the UK. The Brixton Pound is underpinned by a philosophy of economic localism, premised on the idea that it’s a great thing for people to know who they transact with, and to develop local self-resilience rather than reliance on external economies.

I’ve bought a lot of coffee with Brixton Pounds, but the key issue for its future is to what extent a viable, balanced trade in goods and services develops in it. In order for a currency to work there must be people to accept it, and people who use it, but ideally you want a closed loop whereby the people who accept it are also the ones who end up using it with each other.

If I had one cheeky wish, I’d like to see a Brixton Pound ATM installed in the middle of town, smack bang alongside the major bank ATMs on the high street. It could be used to draw out the notes, but also to load cash onto the online pay-by-text system. Perhaps that’s something the Brixton community can work on together.

It’s all very well for a community to have a currency to engage in day-to-day transactions, but what about financial instruments that allow people to invest in their local community, and for local entrepreneurs to raise money? That’s exactly what Agamemnon Otero and the Brixton Energy community shares project has done.

Brixton Energy Solar 1 and 2 are financial products allowing local people to invest in renewable energy schemes in the Loughborough Estate. While most financial instruments are judged only by the financial returns they offer investors (aka. the money you receive from them), the brilliant thing about community shares is that they introduce a new type of return – an emotional return that you can literally experience as you walk through your community. Greater social cohesion, safer streets, and creative projects that instill community pride are just as tangible as extra digits in your bank account, and this is something that few other financial products offer.

Financial instruments like community shares need to be replicated and developed further, but what about simple financial services for lower income people? Brixton is awash in pay-day loan companies. Their presence is evidence of the fact that they offer a needed service, but it’s well-known how extortionate the interest rates are. People who are trying to borrow £400 are the last people who should be paying £100 in interest after a month. Profit-maximising enterprises have a perverse incentive to extract as much as they can from people in financial dire straits, rather than attempting to build up their capacity to get out of that situation. That’s why it’s good to see London Mutual Credit Union offering services to help lower income people, but a lot more work needs to go into this area.

Ideally, efforts at financial inclusion should be combined with empowering community resilience and education initiatives that help develop skills and that offer people a chance to build livelihoods, perhaps even via non-monetary means and gift economies. Take for example, the Restart project, which aims to repair goods, eliminate waste and teach people new skills in the process, an ethos shared by the Remakery,  Brixton People’s Kitchen and the broader Brixton Transition Town movement. These efforts fall into the broader trend towards collaborative sharing economies and collaborative production and consumption initiatives.

Putting it together: Inclusive regeneration vs. dual economy

It’s no secret that Brixton is also in the process of undergoing a disconcerting economic shift, as mobile, monied and middle-class individuals flock into what was once a haven for more marginalised groups in society. The growing fear is that the wave of outside money hitting Brixton will not create meaningful regeneration, but will rather lead to the divisive development of a dual economy in which marginalised communities are gradually undermined and disenfranchised.

Whether these changes can be steered towards empowering economic regeneration is really up to how the process is managed, and in this context the importance of developing inclusive economic innovations is only going to increase. I’d be very interested to hear your thoughts on what those innovations could be, so please do leave comments.

Brett Scott is a campaigner and writer who works in alternative finance and financial activism. His new book – The Heretic’s Guide to Global Finance: Hacking the Future of Money – is published by Pluto Press and is available now. Brixton Pounds also accepted! Brett tweets as @suitpossum

It’s cool to be kind – the People’s Fridge is taking...