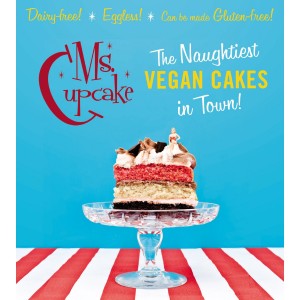 In recent years, the cult of the cupcake has become synonymous with yummy mummies, twee tea parties and a mark of middle-classness. So when Ms Cupcake, London’s first 100% vegan bakery, opened its doors on Coldharbour Lane two years ago, there were some who viewed it sceptically, considering the shop an indicator of things to come. But for Mellissa Morgan, aka Ms Cupcake, Brixton seemed the obvious location to open her bakery. She has lived here for 10 years and says she has always felt an affinity with its music, its culture and many of its locals (her father lives in Kingston, Jamaica). She loves the diversity of the area and continues to be active in the community, most recently as a sponsor and judge in the Great Brixton Bake-off on 27th April.

I had the opportunity to have a chat with Mellissa to ask her more about vegan baking on the cusp of the release of her first cookbook, Ms Cupcake: The Naughtiest Vegan Cakes in Town. When Morgan moved to London from Toronto 14 years ago, she says she was surprised at the lack of proper cake available for vegans here in our fair city. The options at the time were mostly heavy, brick-like slabs, a far cry from the lighter sponge cakes available in North America. At that point, Morgan says she literally fell into a “chasm” in the market that was vegan baking. In 2010, she began making her cakes out of her Brixton kitchen and selling them at various markets around town. Indeed, her timing happened to be perfect, as it coincided at the point where a major interest and resurgence of home baking had begun.

Morgan herself is self-taught so says each recipe in the cookbook is suitable for the home baker. She and her team go through countless iterations of each so in essence, they have done the hard work for us. She says that chances are, if you’ve made a recipe from the cookbook, it will taste the same from her shop as it does straight from your oven. All of her recipes are used in-house so are tried and tested, a reassuring claim for any cookbook to make. I mention to Morgan that I have always found vegan baking to be quite daunting so have subsequently tended to avoided trying it. I assumed vegan cakes were filled with strange and slightly unnatural ingredients that could only be sourced from highly specialist (and expensive) shops. She is quick to dispel the myth that vegan baking is tricky or requires awkward ingredients, and says her cookbook will appeal to both vegans and non-vegans. “Vegan baking has developed a reputation for being difficult because many vegan cookbooks used ingredients that were hard to find. Really, it is incredibly simple. The main difference between standard baking and vegan is method, but the key is to not overcomplicate it.” It was her vow to create recipes that were as straightforward as possible and that contained ingredients that could be found in any supermarket.

Morgan took to veganism at an early age as an ethical choice, but found after she began trading that there was a demand for her cupcakes and savouries from people with all kinds of allergies. She says if you are soya, gluten or nut intolerant, the recipes are adaptable and can be tweaked to suit various dietary needs. For those who are vegan for religious or ethical reasons, rest assured that there are happy cows and chickens all across the land who will approve – there’s not an egg or stick of butter in sight. But do these changes impact flavour or texture? “Not at all,” says Morgan. “About 50% of my customers don’t care that the cakes are vegan. In fact, most can’t tell the difference, and I know that I’ve done my job right.”

With one cookbook under her belt and a successful retail shop, Morgan says the business is only going from strength to strength. Ms Cupcake will be extending its opening hours, expanding its savoury line in order to offer vegan gourmet-style sandwiches, and continuing to offer baking classes to adults and children. Morgan herself is planning a second cookbook, travelling around the world giving talks on vegan baking, and continues to be active in the Brixton community. She is also eager to praise her “incredible” team, who keep the shop running and fill orders whilst she’s away. For all the travelling and the rising popularity, she says she plans to stay local. Her goal isn’t to become a vegan baking tycoon – she’s more interested in maintaining the fact that she has created a product that didn’t exist before in the UK and created six jobs in the community in the process. She is still happiest in her shop in Brixton, talking to customers and her team, thinking up new recipes and doing what she does best – serving up proper cake.

Ms Cupcake: The Naughtiest Vegan Cakes in Town by Mellissa Morgan is published on 9th May by Square Peg and is available for purchase at 20 Storey, 2A Market Row, Brixton.

In praise of a very Brixton bookshop

Arsonists sentenced to 13 years for petrol bomb attack on garage...