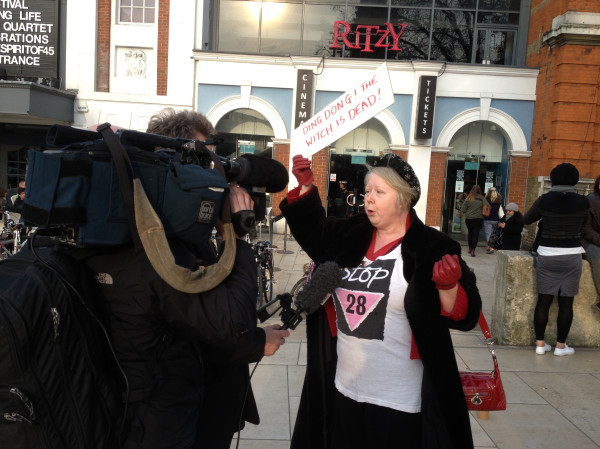 The celebration, publicised through the social networking site Facebook, began at about 6pm in Windrush Square, as people came together with banners, loud hailers and a sound system. By 8pm about 150 people were dancing, chanting and drinking in a celebration of Thatcher’s passing, aged 87.

See pics and video of the gathering

One younger reveller, Dan, 20, was holding a banner saying ‘Ding Dong’ to go with his pal’s which read ‘The Witch is Dead’. He told the Blog: “We’re celebrating the death of one of the most evil people in our history.

“I know she was before my time but she ruined our country. My Grandad has passed away himself, but he said he couldn’t wait to dance on her grave when she was dead, so today I’m doing that for him.”

He added: “Millions of people are in poverty because of her. Her being the first female Prime Minister was disgraceful because she ruined it for women. The effects of what she did are still being felt today.”

Party organiser Craig Parr, from Brixton Socialist Workers Party, was unapologetic. He told the Blog: “We’re here to rejoice the death of Thatcher, but her legacy lives on today. We can see that here in Brixton the poorest are suffering with the bedroom tax and benefit caps.

“If Thatcher was a good Christian woman then maybe she’ll go to heaven, but I’m an atheist so I wont worry about that.” Parr then joined in a rendition of the song “Ding Dong the Witch is Dead.”

The website BuzzFeed asked 19 attendees to write about why they turned up.

Even before last night’s party began it was widely condemned by policiticians. Chuka Umunna MP said the revellers did not represent Brixton itself. He said:  “Holding a party to celebrate the death of any person is totally wrong and in extreme bad taste – to do so in respect of Baroness Thatcher on the day of her death is utterly disgraceful.”

Many commuters stopped on their way home to take pictures of partygoers as they danced to a loud soundsystem in Windrush Square. They partied on the spot where rioters attacked police and set fire to vehicles during the Brixton Riots under Thatcher in 1981.

The atmosphere was one of celebration, with champagne corks heard popping above the music.

Brixton Blog reader Sam Dodd wrote to say:  “I never liked the woman, in fact I thought she was a decidedly destructive and classist warmonger, who destroyed lives and livelihoods and was racist, bigoted, homophobic and generally an utterly, thoroughly, unpleasant person.

“But, to celebrate her death on the streets? It’s a tad tasteless. She was still a mother and has a family mourning for her right now, and whether we liked her or not we could still attempt to act with a bit more decorum instead of like we’re going along to a public stoning or hanging and cheering it on like barbarians. Leaves a bit of a bad taste in the mouth.”

As the clock of Lambeth Town Hall struck midnight the party continued, with revellers spreading out from Windrush Square. One demonstrator, face hidden by a scarf, climbed onto the film board of the Ritzy Cinema to rearrange the letters to read: “Margaret Thatcher Dead, LOL.” And then “Yuppies Out.”Another hung a banner from the roof proclaiming “The B*tch is Dead.”

According to police, two women were arrested on suspicion of burglary after the window of charity shop Barnardos was smashed in Brixton Road. It also appeared that red paint was thrown across the window of Foxtons. Photographer Andy Thornley, who captured much of the destruction, told the Blog that he had to dodge bottles and missiles being hurled at police officers.

This morning the right wing press came down hard on the Brixton party, and there was less bombastic coverage on the Guardian and across national media.

As Brixton sweeps its streets, and boards go up at Barnardos, one thing is clear. Thatcher’s policies still dominate today. They continue to have a resounding impact on Brixton, with its perilous lack of social housing, soaring rents and massive unemployment. Death party or not, Thatcher’s life has made its mark on Brixton.

Diane Abbott: Glad to be in the heart of Brixton for...

Celebrate Brixton’s xmas lights and shop at the Christmas market

New lease of life for Crown and Anchor, Brixton Road