If you’re reading this, the chances are that you’ve already met Pritesh Patel: though some of you may not know it. Neil Sammonds caught up with Brixton tube station’s news kiosk owner Pritesh, to find out more about his life and work.

For as long as I can remember, exchanging a few warm words with Pritesh at the downstairs news kiosk has been part and parcel of my tube journeys. It felt like a treat, then, to be invited on a day I was off work sick to crawl under the counter and chat with him, while he and his co-workers went about their business in that bustling confined space.

“Me and my brother Piyush got this place about 22 years ago”, he says while counting a load of pound coins. “Then there were a handful of shops down here including a record shop, photo shop and café. The leases have had 6-month notice periods on them though, and 16 years back they were all ended when the station was done up. But as we sold travel cards and helped with flow through the station, they turned round and said we could stay after all, but all the others had to go.

“Next big change was the introduction of Oyster. Before that there were more beggars, like station residents, selling on travel cards. Curtis, Alan, Brenda… Alan would help carry papers downstairs, and I’d get him a cup of tea or two. Brenda, she would pull down her drawers and urinate right by the ticket machines. She wouldn’t give a monkey’s.”

Pritesh and his colleague Vera, who’s here from about 4am daily to receive the news deliveries, laugh with the memory.

“Vera’s not had a day off sick in 22, 25 years”, he says proudly, to which I both raise my eyebrows impressed and lower my head in shame, having missed five days myself due to two bouts of flu already this year. “Only when she’s come in and I’ve told her she should go home. Me neither. Maybe we are stronger as we meet with so many people, handling germs on money.  But I work when I’m sick. You have to if you’re self-employed. One Christmas I had a dodgy Chinese and was in the toilet every 10 minutes, but I kept working.”

A man has approached the kiosk and told Pritesh he is “four points off”. What was all that about? “That’s Monty, one of the inspectors. We have a Fantasy Football league here. A few drivers, cleaners, inspectors…I don’t know much about football but Amin who works here does. But he’s Muslim so he can’t bet, so I put in the fiver and Amin manages the team. At the end of the season, winner takes all.”

I grin. It sounds fun working here, mixing with so many people.  “Some say ‘You work in Brixton, you must have problems’, but we’ve never had any violence, any real trouble. And all sorts pass by… Judges, barristers, actors, editors, a couple of MPs, food critics…you’d never know. One thing I learnt here, you can never judge by appearances. But do I like it? Yes and no. I’m happy I have work, but it feels like a prison. I’m trapped in here, to pay the mortgage, feed my kids. I look out and see others growing up, leaving school, changing jobs…and I’m stuck in here.” He says all this, as ever, in an upbeat and matter-of-fact way. 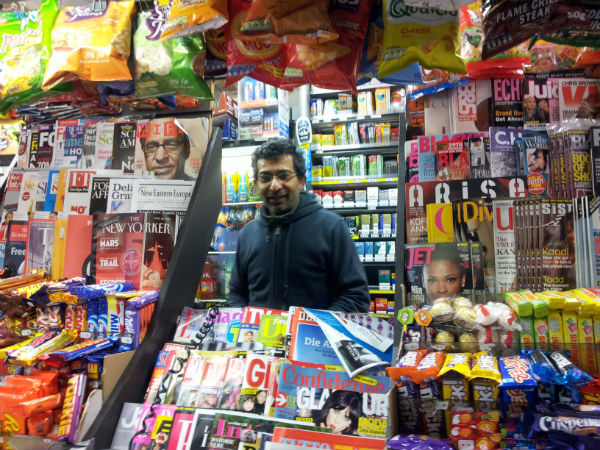 And how does he feel his shop fits into all the changes in Brixton? “The newsagent business is going the way of vinyl. 70-80% down on a decade back and getting worse year on year. We’d sell 350 copies of The Guardian a day, now it’s 100. Even my children don’t read newspapers. Times are hard and why buy something you can read for free on-line? Or pick up a free Metro in the morning, a free Standard in the evening. Others buy subscriptions for less than cover price, so don’t come here, and I can’t blame them. With the diversification we do okay, more people from South America reading Spanish, more papers in Arabic…and these sales keep us ticking along, along with some more specialist fashion and art magazines. We need to keep diversifying. We make only 2% on ticket sales, but at least that brings people over to us who buy chocolate, drinks, magazines. And meanwhile the Brixton economy gets harder and harder. High street rents here are £150,000 a year, plus up to £100,000 in rates. So the independents build the success then get forced out. Locals can’t afford the meals in the restaurants. Everything is overvalued. In two years’ time we won’t be here, at least not as we are now.”

As ever, Pritesh says this engagingly and with a smile. I move to leave, check through my notes and realise I don’t know his surname. “Patel”. Your parents came from India? “We’re a Gujarati family who lived in Uganda. We were thrown out by Idi Amin, in ’72. I was seven or eight. In Uganda my dad owned a lumber yard. We lost all that and came here. Here he became a labourer in a lumber yard, carrying bits of other people’s wood around.”

As sobering a reminder as any that good things can painfully come to end. As I crawl back out from under the counter, Pritesh is bantering with an older English customer he respectfully refers to as “Young sir”.  May his business, and our Brixton, not change too much too soon.

Brixton tube commuters enjoy full use of escalators today – but...