The young Brixton boxer AJ Carter has just won his first professional boxing match. On the sidelines of the Brixton Rec indoor football pitch, watching his uncle Steadman Scott train youngsters in footie, the 25 year-old spoke to us about his what the boxing has done for him 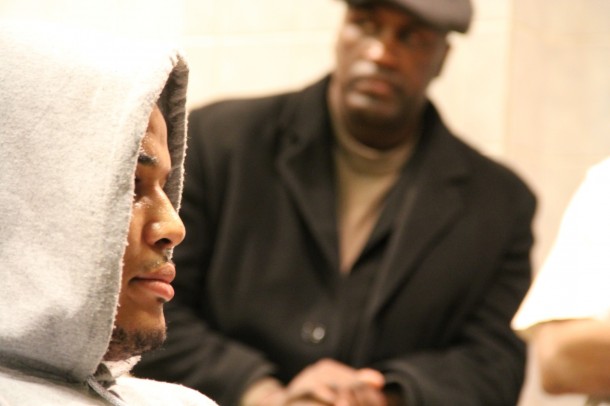 When he was a young child, AJ Carter’s father used to force him to train in boxing. AJ had the typical reaction any kid would have at that age to their parent making them do something – he didn’t want to. But his father, an ex-pro himself and a regular preacher outside Brixton tube, recognized something AJ didn’t yet know – the potential for sport to instill confidence, self-control and focus in a young boy growing up in Brixton. “As I grew older”, says AJ, “I realized there’s not really much opportunity unless you make it yourself. I started enjoying boxing, so I thought I’d give it a go at about 22, and now I’m into it fully.” On April 5, AJ will fight in his first professional event at Grays in Essex.

Soon into his training in those early twenties, AJ got a bad spinal injury and was forced to stop for over a year. “That was probably the toughest time to stay strong, emotionally and spiritually – you want to do something but you can’t actually physically do it. I got into some trouble that made me wake up – with the police. I thought, ‘you know what, I need to take this seriously’. I said to myself, ‘I’m going to stop hanging around the wrong people’. It’s hard initially because it’s kind of part of your routine but then you have to think that the people who would take offence to it are not the friends that I need; the friends that I need are the ones that I have around me. They’re quite happy for me.”

Boxing is, of course, not a sport to be taken lightly. If he was going to do it properly, AJ had to be focused. “Boxing is the only sport that’s not a game. You can really hurt yourself. If I don’t take it seriously, I’m the one that’s going to suffer.”

His father is still his main coach, of course. And now he is keen to set up a new boxing class at the Recreation Centre, currently under consideration by GLL who run the Rec. “There’s nothing actually for kids to come and explore the world of boxing. I think in terms of confidence and self-control, a lot of young kids would need that. I would help at the class and try to teach them what I know”. If they get it off the ground, the Carters will pass their family knowledge of boxing on to many Brixton children and it will be a welcome addition to the community sports clubs at the Rec.