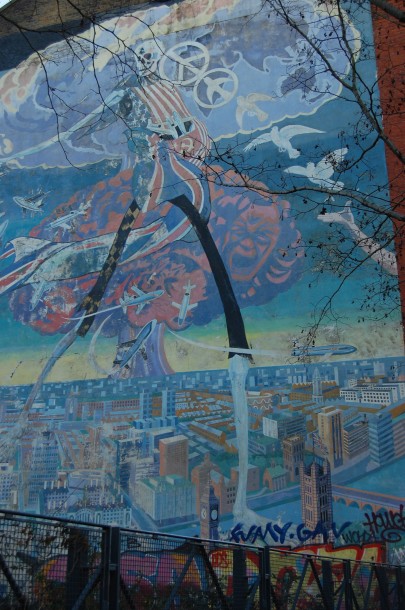 More than 1,000 residents have joined a campaign to save an iconic piece of Brixton history.

With over 1000 signatures at the time of print, the petition opposes any plans to remove Nuclear Dawn and demands that it is “protected and repaired for future generations to enjoy.”

Nuclear Dawn is in great need of care and attention, with graffiti currently obscuring one of the best scenes in the picture – Margaret Thatcher and her fellow politicians hiding in a bunker under Parliament as the rest of London is nuked.

Ruth Miller of LMPS said: “The response to the petition has been amazing. It’s been mentioned all over the place. We are really pleased with how positive it’s been and got local people as well. For the future of the mural, the petition will help us show it has bigger impact. The head of designation at English heritage has said he thought it should be listed too, so that’s really key.”

Cllr Pete Robbins, Cabinet Member for Housing and Regeneration, said: “There are no plans to remove the mural, in fact we are looking into making even more of a feature of it as part of the exciting redevelopment project for Somerleyton Road. A representative of the London Mural Protection Trust has been involved in developing this community led project and advising on how to keep the mural safe.”

Nuclear Dawn was painted by Brian Barnes and Dale McCrea in 1980, at the peak of the Cold War, and was one of several ‘peace murals’ commissioned around London at this time. It is locally listed and recognised as a piece of Brixton heritage, but this does not mean it is safe from demolition and its value to the local community would still have to be proven were there to be plans to remove it.

You can find links to the petition at londonmuralpreservationsociety.wordpress.com

Is there a third way for Brixton development?