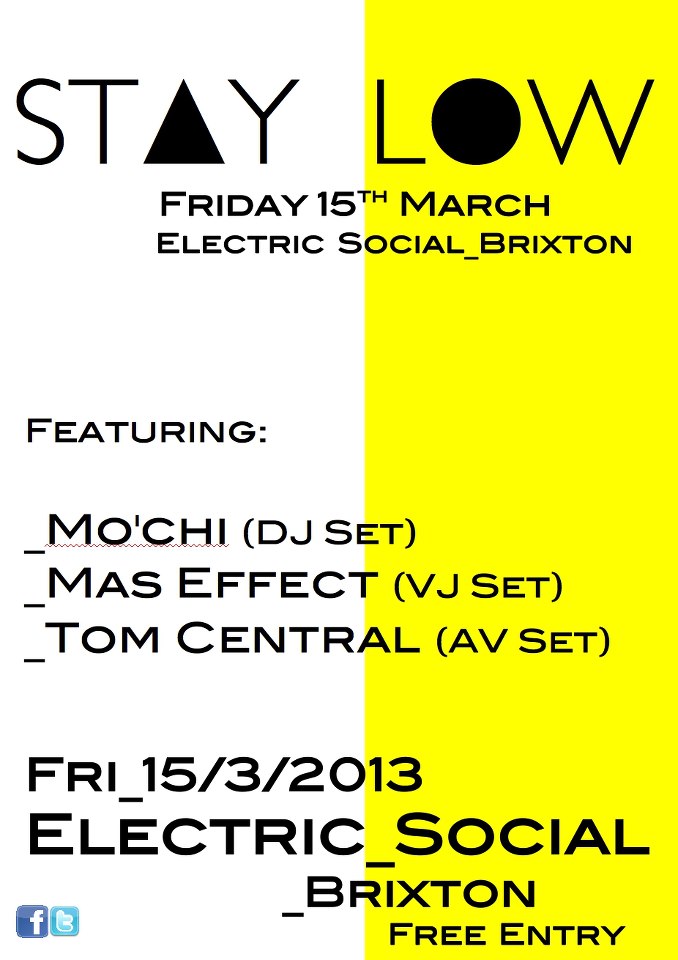 Stay Low is a new monthly audio and visual night for Brixton’s club scene. Music policy is strictly cutting edge and contemporary, expect to hear future bass and beats, from house, to two-step to hip hop.

Organiser and resident DJ Mo’chi has been spinning in and around Brixton for the last few years under the moniker of BRXTNFNK. He hosts regular nights at The White Horse including BRXTNFNK and All Night Long, and also plays a hip hop, disco and funk set at Electric Social.

Visuals will provide an extra dimension to the night, mixed and remixed live by resident Mas Effect and special guest Tom Central. Tom has supported the likes of Luke Vibert, Dangermouse, Flying Lotus and Prince Paul and has been releasing records on Keep Up! since 2008. He has performed his VJ set around Europe and is debuting a brand new show for Stay Low.

Mas Effect is a musician originally from New York and now based in Brixton who fuses video design and live performance. He uses a Monome and other live instruments to alter and manipulate video footage taken from his extensive travels around the world in Europe, Africa, Asia, North America, and the Caribbean. The result is a hypnotic and captivating exploration of time, space and the exotic.

Stay Low takes place every month at Electric Social on Acre Lane, the opening night is this Friday (March 15th) form 9pm to 2am, entry is free.

Brixton’s Plan B bought by owners of XOYO

Take Two: Cheap Mondays @ The Ritzy and learn to swing...