Chris Berry went to find out more about the organisation as it celebrates its 25th year, as well as for the launch of the film Action for Reaction.

When you walk down Railton road towards Herne Hill station, you can’t miss 198 Contemporary Art and Learning. Standing proudly on the corner, the community space has been a beacon of local arts and learning for over two decades.

198 opened in 1988, led by John Morgan and Zoe Lindsay-Thomas. In the wake of the riots of 1981 and 1985, both John and Zoe felt the need to launch a black social space, and Railton road was a significantchoice of location.

Lucy Davies, Director of 198, explains: “at that time, it was hard for black artists to get representation in mainstream media, let alone in galleries, and so local artists began their own grassroots kind of movement, by bringing their work to this venue to hang it on the walls”.
The venue took on an increasingly creative focus as more and more spontaneous musical and cultural events took place in what used to be the backyard. All kinds of happenings from jazz performances, to song recitals given by a youth choir from Soweto, have taken place in this corner of Brixton. Collaborations with artists from Maori communities, and visitors from Syria, Cuba, and further afield have enriched the organisation and everyone involved. They’ve even had a visit from Richard Attenborough.

Rotimi Fani-Kayode – the renowned British Nigerian photographer – had connections early on with 198, upon his return from Brooklyn’s Pratt Institute. So too did Raymond Watson, the sculptor behind the First Child, a prominent sight at the corner of Max Roach Park – the first public sculpture by a black artist in the UK, no less. Even more importantly still, this sculpture’s significance resonates not only as part of black Britain’s artistic achievements, but it also in its commemoration of the Soweto uprising in 1976.

In light of this historical importance, what had begun as a much-needed space for the black community, gradually developed into a space celebrating cultural diversity in all its forms.The early involvement of pioneering – and under-represented – figures such as these reflects 198’s core curatorial ethos.

Davies outlines how, “up to this very day, the work exhibited remains very socially engaged, always issue-based, providing a platform for discussion of social and political issues”.

Fast forward to the launch of Action for Reaction, and this emphasis on the discussion, contemplation and reflection on pressing social matters is demonstrated in full. Local youngsters initiated the project last year, funded by the Home office, through the Communities Against Gangs, Guns and Knives Fund.

The film is a collection of conversations with community figures and leaders about the temptations and false promises of being sucked into gang involvement. Having been made by young people for young people, it examines a cross section of relevant opinion, from PC Erol Patterson (African Caribbean Community Liaison Officer), to the owner of Brixton record shop Blacker Dread. Each participant shares their views, and importantly, recounts their personal experiences of gun, gang and knife crime, leaving a deep impression on any viewer. With the divisive policy of Joint Enterprise arguably taking centre stage alongside these figures, it’s invaluable in its educational value. 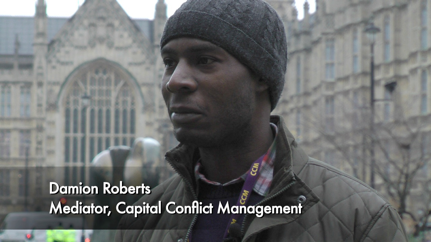 As a whole, the film and the following group discussion both reflect the participatory nature that is so characteristic of 198’s initiatives. One of the main driving factors behind this is their desire to champion marginalised voices, and to do their part to help disadvantaged youth, mired in educational underachievement. The film will shortly be touring schools and youth centres in areas similarly affected, starting in Battersea and Wandsworth.