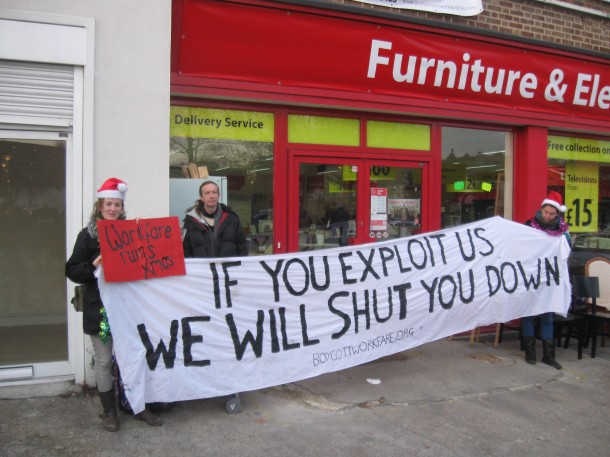 A dozen people occupied the British Heart Foundation, Acre Lane, on Wednesday afternoon in protest against their involvement in government schemes which force unemployed people to work for their benefits.

The protestors, wearing santa hats and tinsel and carrying placards which read ‘No love for BHF’ and ‘Workfare ruins Christmas’, occupied the store for half an hour and spoke with customers and staff about the charities’ use of workfare.

The action was part of Boycott Workfare’s week of action against workfare which has seen protests occur in 9 cities across the UK.

The British Heart Foundation has been one of the main organisations taking workfare with placements in every one of its 700 hundred stores.

The charity stated last month that they are “moving away from involvement in the mandatory work activity programme.”

Boycott Workfare campaigner Liz Wyatt said: “The British Heart Foundation say that they are moving away from workfare, but we are here to demand that they pull out completely and we want to see the evidence as well.

“What are charities doing being involved in schemes that are causing poverty and hardship to claimants who will lose their benefits if they do not work for free?

“From last Monday the government have introduced policy that will see sick and disabled people forced to work for their subsistence benefits for an indefinite period of time.”

The protestors then visited Poundland and Superdrug, who are also involved in government workfare schemes, and handed out leaflets to passersby.