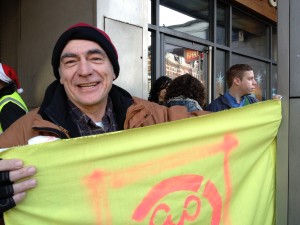 The Brixton UK Uncut group occupied Starbucks on Brixton Rd this weekend to protest against tax evasion and cuts to local One O’Clock clubs.

Activists chose to target Starbucks as a result of its tax avoidance; taxes UK Uncut
claim could fund public services currently being cut by the government.

The action took place on Saturday, three days after the Chancellor’s autumn
statement when £3.7 billion of new welfare cuts were announced.

Campaigners have highlighted research showing that women will experience a disproportionate impact as a result of the government’s public spending cuts.

Chris Blake from Lambeth Save Our Services said: “we’re protesting about the fact that Starbucks has been in the UK for about 15 years and in that time has hardly paid any corporation tax. There are real cuts going on in Brixton. We’ve seen major cuts to adventure playgrounds and the council trying to cut the One O’Clock clubs and libraries too. They’ve had their funding cut from central government. These cuts could be reversed if people like Starbucks would pay their tax.”

Starbucks offered to pay £10 million in corporation tax last week after a furore erupted over their low rates of tax. Another activist, Lucy Hurn, said: “that’s a voluntary thing isn’t it? We need to actually change the legislation so that all corporates will do it, rather than them seeing a bad PR moment coming and making a voluntary donation.”