A resident of Brixton for over seven years, Courttia has been active in both screen and playwriting, as well as in mentoring emerging creative writers. Chris Berry caught up with him one freezing evening in the warmth of Kaff Bar 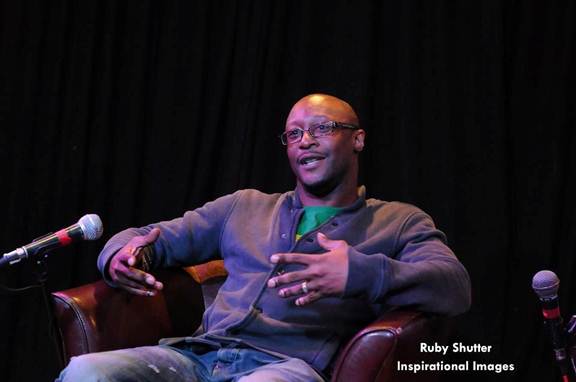 After several years in Brixton, what is it about the place that’s kept you here?

Being such a vibrant area, it’s dynamic with a real beating heart. It’s just alive isn’t it? I love the creative hub that’s developed, and I really do feed off that creative energy myself – I’ve written at least three of my books while I’ve been here. That said, it’s also changed a hell of a lot in the time I’ve been here, and of course that’s not necessarily a bad thing. One thing I would say is there seems to be more and more of a class divide, and not that much interaction between the two.

That’s interesting, as there’s been a lot of discussion in Brixton about gentrification recently. What are your thoughts on the subject?

Like I said, it doesn’t seem like there’s much mixing between some of the more recent residents of Brixton, and those who have grown up in the area. Where I grew up in west London, we’d mix with very different kids from all over the local area, but also from all over the social spectrum. One day we could be invited over to a friend’s on the estate, on another we would visit some really plush houses of friends from school. Things seem to be playing out a bit differently here.

I actually see a lot of parallels between what Ladbroke Grove and Portobello Road used to be like, and the direction Brixton’s headed in today. It could be case that big businesses really go for cashing in on the success of the area, with the side effect that poorer locals get pushed out.

Your novels and short stories not only jump around different locations, but also between genres, and even writing styles. We see only glimpses of Brixton at the start of ‘Snakeskin’; will you be rooting any of your upcoming works more firmly in SW9/ SW2?

If I’m honest, I wouldn’t really set out with that objective in mind. One thing I’ve always strived for in my work is to not be tied down too much. I’ve got a real fear of being typecast as being stuck within just one type of setting. Whether we’re talking about the style of the narrative, the type of characters, or even how gritty a novel is, I’ve always felt the need to stay on my toes. Generally speaking, when some people talk about black writers, they tend to mention a lack of representation, so that’s why I like to keep things moving.

After all, why let Mr. Joyce have all the fun in switching things up a bit?

Indeed, why should he have all the fun? Tell me more about your writing style.

What’s interesting is that I’ve discovered that I write my books in twos. I was thinking about it just the other day; it began with The Scholar, followed by the Society Within – those two are the first real double act. Then the next two after that, Snakeskin and The Dying Wish, were centred around a world that I wanted to widen a little bit more. I’m also much more interested in exploring the depths of characters, of the people themselves, as opposed to investigating their environments and whether or not they’re a product of where they come from.

Above all, I’m all about writing in a relatable, accessible way. I was never really trained as a writer, and never went to university to learn the ‘craft’, and I think in terms of style, I’m all the better for it.

I’m currently in the midst of a PhD, and am definitely liking the way this experience has translated into academic work, most of all in my thesis. It’s going really well, because of the path I’ve taken, and how my work has grown so organically.

That’s great to hear. I just have one final question for you: if Alex Wheatle is seen by many as the Brixton Bard, what does that make you as a fellow Brixtonite?

As much respect as I’ve got for the ‘Brixon Bard’, I’m not looking to challenge him for that title any time soon! As I said, I personally try to avoid being too associated with any one area. At the end of the day, that could really influence general perception of my work. I’d rather keep my readers on their toes!

Nice once Courttia. His upcoming novel, ‘The Gospel According to Cane’, comes out on the 5th February 2013.

Chris Berry can be found tweeting at @crdberry

Simone Richardson - 5 April, 2020 0
You can still enjoy singing in a choir with others even if you are keeping your social distance. An on-line choir is still communal...

Are you experiencing domestic abuse? The Gaia Centre is open

Simone Richardson - 5 April, 2020 0
You can still enjoy singing in a choir with others even if you are keeping your social distance. An on-line choir is still communal...

Turn it UP for Unity