A police officer is in hospital after an apparent hit and run incident in Arlingford Road, Brixton.

The officer was struck by a black BMW just after 9.45am this morning (Sunday) as they were responding to call about another matter.

A spokesperson for the Metropolitan Police said: ” Two officers were attending an address in Arlingford Road,
near Tulse Hill, in relation to an unrelated matter.

The spokesperson added: “He went over to speak to the occupant who at this point started the engine and began to drive off. The BMW then collided with the PC before making off in the direction of Brixton.”

Ambulance crews were called to the scene and the injured police officer was taken to a south London hospital for treatment. He remained there this evening for further assessment.

The spokesperson confirmed: “Inquiries are under way to locate the vehicle involved.”

A shopkeeper at Food and Wine, Tulse Hill, who did not want to be named, said: “We were sleeping upstairs and heard the helicopter. It was then that we saw about 15 police cars in the street below.

“Apparently somebody hit a policeman with their car, they took the officer to hospital.”

The road was re-opened to traffic at about midday. 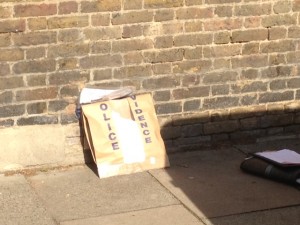