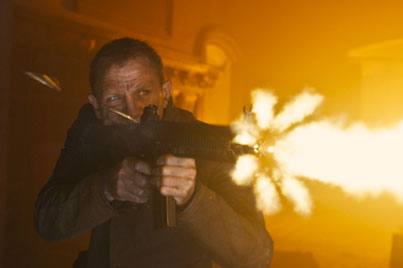 Over the next month at the Ritzy cinema (aka the best cinema in south London), you can expect the usual high quality and cinematic variety.

The hot ticket in the coming few weeks is new Bond extravaganza Skyfall (Oct 26), which, though still not a great title, is a million times better than “Quantum of Solace”. Directed by Sam Mendes (who seems to have been taking action-movie notes from Christopher Nolan) it’s been widely hailed as the best Bond in ages, making a virtue out of Daniel Craig’s surliness, and bolstered by a fright-wigged Javier Bardem as creepy villain Silva. This one’ll sell out again and again, so you’d be advised to book well in advance.

Five years after There Will Be Blood, the outrageously talented Paul Thomas Anderson returns with The Master (Nov 2). It’s an elliptical, enigmatic and expansive drama touching on the beginnings of Scientology, and featuring absolutely stunning turns from Joaquin Phoenix and Philip Seymour Hoffman as an ex-Navy drifter and a charismatic “cult” leader respectively. When you walk out into the Brixton air, you’ll need some time alone to process what you’ve seen.

Fresh from its recent receipt of the Best Film award at the BFI London Film Festival, Jacques Audiard’s Rust and Bone arrives (Nov 2), starring Marion Cotillard as a whale trailer who suffers a terrible accident, and Matthias Schoenaerts as the bare-knuckle bruiser who comes to her aid. It’s occasionally powerful, but also pulpy, shoddily constructed and highly manipulative. Despite some good acting (and some interesting soundtrack selections), it’s not a patch on the director’s last film, A Prophet.

Another big London Film Festival hit was Ben Affleck’s Argo (Nov 7), a dramatization of the 1979 joint CIA-Canadian secret operation to extract six fugitive American diplomatic personnel from revolutionary Iran. Their plan? To produce a bogus sci-fi movie bang in the middle of the Iranian desert! With previous films Gone Baby Gone and The Town, Affleck has established a reputation as a director of note, and his stock will only rise further with this sweeping, enjoyable thriller.

Other noteworthy fare appearing in the next few weeks include the extended US cut of Stanley Kubrick’s classic horror The Shining (Nov 2), and  grandiose literary adaptation Great Expectations (Nov 30), starring Ralph Fiennes and Helena Bonham Carter. Meanwhile, films including Beasts of the Southern Wild and Frankenweenie 3D continue their runs.