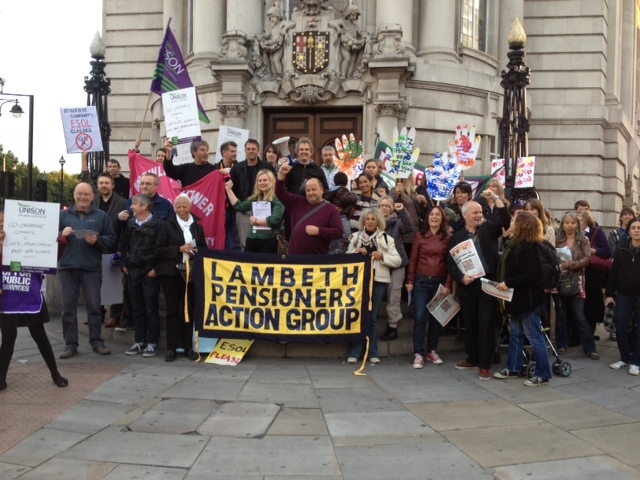 Dozens lobbied councillors ahead of a cabinet meeting, saying that council services, like children’s clubs, should be kept under council control.

They fear that plans to hand over One O’Clock Clubs to community “trusts” will only lead to further cuts and closures, and leave children in danger.

Last month all staffed adventure playgrounds in Lambeth were closed after serious breaches of staff vetting procedures by the organisation tasked to run them emerged. The playgrounds had previously been handed to the Lambeth Play Association as part of the borough’s co-operative policy.

Eleanor Wharf, pictured with her son Sebastian Danvers, said: “I use the One O’clock Club in Brockwell Park. It isn’t being maintained very well – the toys are dirty and it’s not the nice environment that it once was – and sometimes I get there to find it is closed and I have to make a Plan B.

“It’s so important for parents to have a place to go, have a cup of tea, socialise with other parents and share their worries, so I worry about it.”

Grace Lally, a mum of two who uses the Loughborough Park and Max Roach clubs, said staff and parents are “completely demoralised.” Speaking outside the Town Hall she said:  “Parents have stopped turning up because they can’t rely on it being open. It feels like the council is only bothered about the finances, not the effect this is having on the community.”

The staff, and some parents, say they are frustrated about Lambeth Council’s rejection of a staff bid to take over the running of the clubs. However, council leader Steve Reed said this idea was not favoured during a public consultation on the future of the centres.

Steve Reed told the Blog: “Our council was rated outstanding at safeguarding by Ofsted, both in our own services and when we work with partners. The argument that in-house services are better at safeguarding children is totally undermined by the Baby P case.”

He said that under the council’s plans, all local residents could join a trust that would decide who would run the clubs, meaning that parents could decide what the best service was. “We trust the parents and that is why we are putting them in control,” he said.

An employee, who asked not to be named, said: “The service has been running for 45 years and it’s been working for the community all that time. Because of cuts and because staff aren’t being replaced with temps when they are sick or stressed, there are now just 11 staff to run 12 clubs and you need to have two members of staff per club. So there are closures. Parents are turning up to find the centres closed.”

The employee said she and colleagues would rather accept redundancy than work for the new providers, “because we don’t think they will run it properly.”

Sudbourne Primary School expansion to go ahead as new homes get...