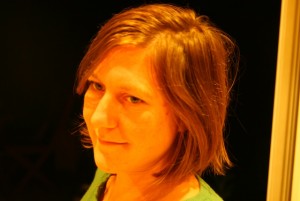 Zelda Rhiando’s novel Caposcripti has just won the inaugural Kidwell-e Ebook award. Barney Evison met up with Zelda in her studio above the Granville Arcade to ask her about the book, which features a 19th-Century explorer, mind-altering drugs and an artistic sociopath with a penchant for shrunken heads.

The Kidwell-e Festival is the UK’s first book festival dedicated to ebooks and digital publishing. Founded by author Julian Ruck, the festival took place in Kidwelly, Wales, on the last weekend of July and also awards a £10,000 prize to the best unpublished or self-published British ebook of the year. Zelda Rhiando’s first novel Caposcripti, self-published in late 2011, won the award.

Caposcripti is really two stories running side by side: one, a grim urban tale of murder and madness; the other a journey deep into the Amazon in search of a lost tribe. The main plotline is set in London and follows an intellectual loner, the Photographer, who kidnaps urban dropouts, conducting morbid experiments before tattooing and shrinking their heads in mimicry of Amazonian tribal rituals. This is mirrored by the story of the Explorer, told through a recovered journal, which follows a man’s search for an undiscovered tribe whose language may hold secrets about the origins of humanity. I asked Zelda what drove her to write the novel, and she answered that it had come to her in a dream.

She dreamt about the Photographer and his bizarre murders, and confesses to a lifelong fascination with the Amazon Basin and the tribes that inhabit it. Her dream became intermingled with this fascination and the book began to take shape in her mind. As part of her research for this novel, Zelda travelled to the Amazon rainforest to spend time with the Jivaro – one of the few surviving Amazon tribes which still practices head-shrinking. The Caposcripti tribe of the novel are entirely fictional, but many of their rituals and customs are based on what Zelda saw during her time with the Jivaro. 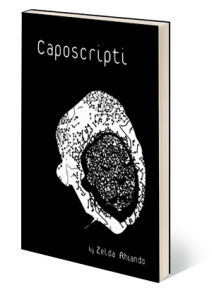 Central to Caposcripti is the search for an original language – supposedly the language of a unified humanity, lost when human beings were scattered by God after building the Tower of Babel. The novel explores this idea suggesting that everyone has an essential need to communicate, whether they live in the depths of South London or the Amazon Rainforest. The use of the hallucinogenic drug Ayahuasca and a shamanic ceremony – based on the real Ayahuasca ceremony still practiced by tribes in the Amazon (and some spiritualists in Brighton) – becomes a mechanism to communicate on a very different level. “In the West we may find it strange, but the tribes use it as a sort of sanity check,” says Zelda. “They use it to reconnect with the spirits of the jungle.”

Zelda, who undertook this ceremony herself when abroad, depicts this ritual as a way to access something beyond modern languages and closer to an ancient form of communication. Her characters, the Explorer and the Photographer, are in her own words “both in flight from modernity, searching for something pure and timeless”. Every inch of London is mapped, and the Amazon seems to present one of the last uncharted areas of land on Earth, away from modern technology. Nowadays this is largely a myth, with many tribes fully equipped with satellite TV.

In October Zelda is heading out to Japan for six weeks to carry out research for her next book A Fist Full of Cherries. She talked me through the premise of her second novel, and revealed that she is planning on setting it around the 2011 Tohoku tsunami. In the aftermath of the disaster, an English man runs away from his Japanese wife after murdering their 3 month-old baby, disappearing into the coldest parts of Northern Japan. His wife thinks he and the baby have died in the tsunami, and the novel follows their parallel stories.

As well as her personal projects, Zelda is very much a part of the local artistic community, organising the Brixton Book Jam with fellow Brixton author James Wallis. The event was not only an inspiring and entertaining evening for book fans, but was a great opportunity for authors to meet and chat in a relaxed atmosphere: “Authors are often intimidated by the public,” she said. “It can also be quite a lonely profession too.”

Zelda feels that authors don’t really get to socialise much and the Book Jam was an attempt to bring this rather disparate community together. The next Brixton Book Jam is on 1st October and will again take place in the Hootananny. Keep an eye on the blog for more details. Caposcripti is available in print format from all good bookshops, and online from Caposcripti.com or Amazon.

Barney Evison is a regular contributor to the Culture section of the Brixton Blog. Follow him on Twitter at@BarneyEvison.