A loveable ginger cat missing from his Hayter Road since Wednesday returned home safe and well this morning.

Owner Jools Holroyd had been “frantic” with worry and launched a campaign to find 4-year-old Ziggy, but she told the Blog today he came home of his own accord last night (Friday).

Ms Holroyd said: “The wayward little scamp came in through the cat flap last night and is safe and well. As he’s never ever disappeared before in four years we got so terribly anxious.

“Many, many, many thanks for everyone’s help.  We’re still not sure where he got to but likely could’ve inadvertently got locked in someone’s house as he was dry when he appeared despite the rain – either that or someone’s conscience saw the flyers and let him out.”

If you have a missing pet the Brixton Blog could help you find it. Email newsdesk@brixtonblog.com. 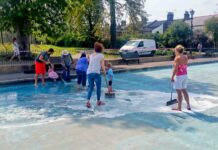