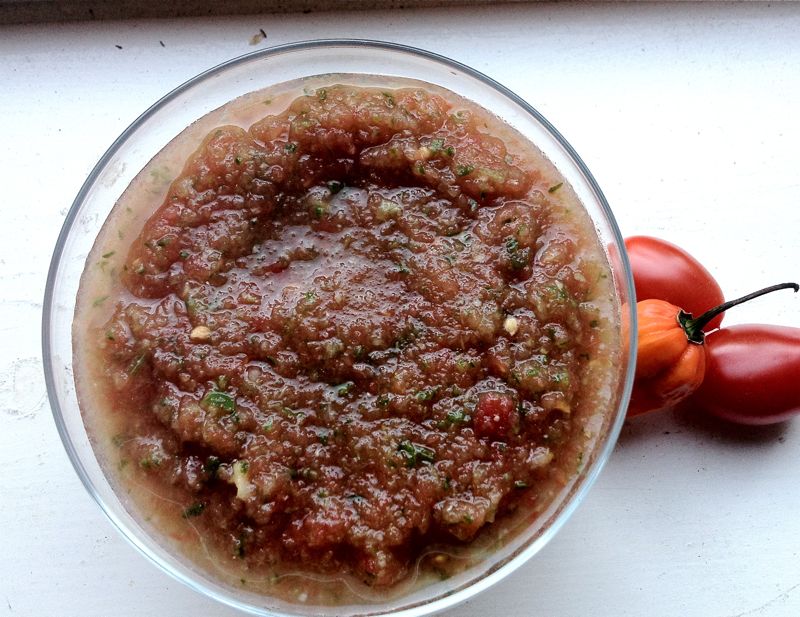 Quick! The sun’s shining and the seasonal fruit and veg are fantastic in the market! Make a quick and refreshing summer meal and then go out and enjoy the weather in one of Brixton’s lovely outdoor spaces instead of slaving over a stove!

Gazpacho makes the most of the summer tomatoes which are at their fattest and tastiest right now and this version has a kick courtesy of the homemade peri peri sauce stirred through it. It might not be considered authentic by gazpacho experts, but it’s utterly delicious all the same!

I bought a bag of big red chillies at the Wing Tai and there were 8 in it so went with that number. Roast all the chillies until blackened and blistered. Pop the garlic in as well to roast, but wrap the cloves in foil. This should take about 25 minutes at 200℃ in the oven. Make sure you wear latex gloves and once the chillies are cool enough to handle, top and tail, then chop the red ones finely. Remove the seeds from one of the scotch bonnets. Squeeze the garlic out of its skin. Then put everything in the blender and blitz until a thick puree. Add in the lemon juice and enough vinegar to make the consistency like a thick ketchup. Pour into a sterilised jar and keep in the fridge. It’s pretty hot, and fairly addictive, especially used raw, cooking mellows it to a pleasant tingle. It’s also so easy to make and you can  adjust the chilli kick to your choice. I made a stunning peri peri chicken with it and have been smearing it on burritos with abandon… 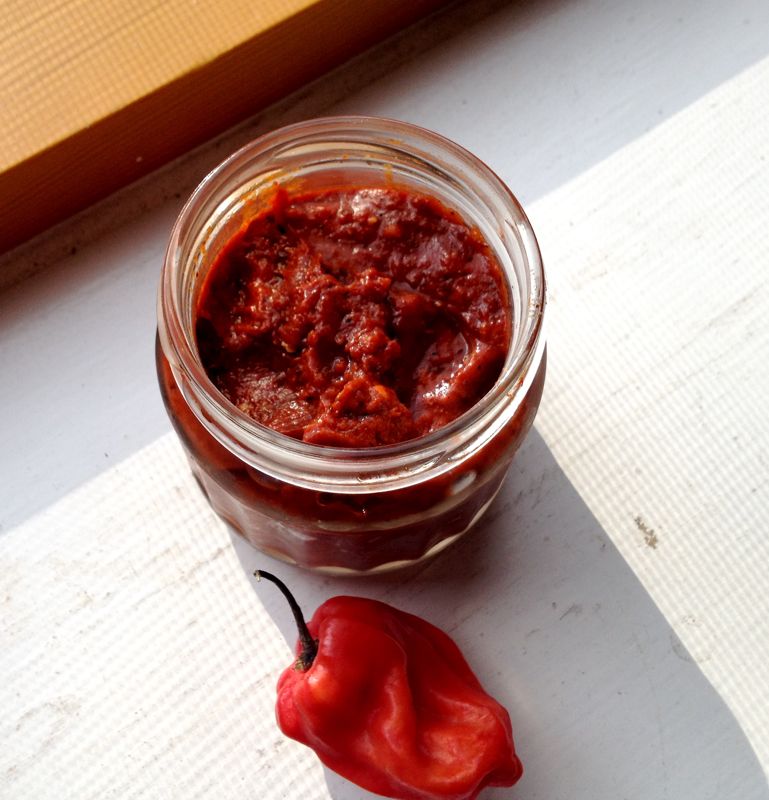 To make the soup, make a cross in the top and bottom of the tomatoes with a knife and then blanch in boiling water so the skins slip off. Remove the seeds and put the flesh in a blender. Add in the skinned red pepper, the chopped cucumber (seeds and all), the whole scallion and the roughly chopped red onion and pulse until well blended, but still a little bit chunky. Add in the sherry, the pinch of sugar (tomatoes love a tiny bit of sugar. It enhances their sweetness and flavour, but don’t overdo it) and the peri peri sauce and whizz again briefly. You should have a thick soup with just enough liquid to not look solid. Then chill well in the fridge before serving.

I was sceptical about cold soup until I tried this. It’s clean and refreshing with just enough kick on the way down to give you a little shudder of enjoyment. It’s a dish in it’s own right and nothing like soup not served warm enough. You can serve it with a little bit of cured ham on the top or some hardboiled egg or olives if you want it a little bit more substantial, but I was amazed by now filling it was. Easy, healthy, delicious. What more could you want?

Baking Bad – how pastry power is changing prison lives in...

If Nour can go, what else could we lose?