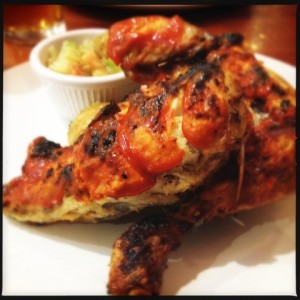 It must be hard running your own restaurant. I can’t imagine how difficult it must be to try to please a huge variety of people, all with different likes and dislikes. Even harder is being surrounded by lots of great places in the foodie-concentrated Market Row and Granville Aracade, now more widely known as Brixton Village. There are now many local places who are in fierce but friendly competition to be the de facto choice for local punters.

And now the owners of the Tulse Hill restaurant, Brazas, have stepped into the ring and recently opened Prima Donna in Market Row.  The name suggests Italian, or maybe even tapas, but it is in fact a new grilled meat restaurant. Brixton Village Grill has already established itself, quite rightly, as a forerunner in the terrain by consistently serving fantastic grilled meats and fish with their atomic homemade piri piri sauce. Can Prima Donna step up to the mark?

The menu is limited to a few little starters like bread and olives and the mains are focused on piri piri chicken and soy-glazed ribs, with a couple vegetarian options for those less into the atavistic delight of eating meat off the bone with their teeth.  The wine list is equally limited but I enjoyed a nice Tempranillo/Syrah blend and they do have Sagres lager on tap, which seemed to go down well with some fellow diners.

We split the courgette fritters, one of the vegetarian mains, as a starter. A large portion of eggy tortilla-like slabs appeared, covered in spinach, cherry tomatoes, feta and a balsamic dressing. They were not as light as I had hoped, but had a nice hint of mint, which heightened the courgette flavours and melded quite nicely with the rest of its accompaniments. I would have preferred the fritters to have a bit of a crunch on the outside to give them more texture against the freshness of the spinach and tomatoes. They were a touch too soggy to stand up to the dressing.

Next we had chicken and ribs for mains. I had mine piri piri style (you can have plain if you’re not into the heat) with salad and new potatoes and my other half went for ribs and chunky chips, which also came with a bit of sweet corn.  The chicken had decent heat and flavour, but the breast meat was on the dry side. The legs and thighs were a little juicier than the breast, and overall the skin was crisp and nicely salty. With the chicken came a small portion of avocado salsa, which turned out to be the highlight of the dish. Light with wonderfully fresh flavours of coriander and onion and tomato really cut through the creamy avocado and it gave some much-needed moisture to the chicken.

The ribs were a disappointment. Dry, over-roasted, tough. The soy glaze seemed to have been charred to an inch of its life and what was left was a slightly soy-carbon taste, which isn’t exactly bad if you’re into that, but if they were going to grill the ribs like this, an accompanying sauce would have been welcomed.

For both dishes, the sides of new potatoes and chips were undercooked. To me, this seems more teething problems than anything else. Often the seemingly less important vegetables get forgotten in an attempt to master the main event, so I’d let them off for this, but it is something that can drain the diner of confidence in the kitchen. The sweet corn that came with the ribs was decent, but it is not in season locally, so I would have preferred something that hadn’t been flown in from some far flung country.

We finished with a slice of raspberry and blueberry amaretto cake, brought in from Maurillio, which was, frankly, the nicest thing we ate during our visit. The cake had fat chunks of amaretti biscuits nestled in its lovely crumbly topping. A berry ripple gave it slightly light tangy hit; a moist and quite delightful little treat it turned out to be.

I was hoping for the best when I stepped into Prima Donna. I went in not knowing what to expect food-wise and emerged a couple hours later a little wiser and a little disappointed. Not that the food was completely terrible. It really wasn’t. But it just seemed to be really lacking that extra element which would make it more the obvious choice over its neighbouring restaurants. Perhaps it is the inattention to detail – slightly overcooked meat and slightly undercooked vegetables – that stood out to me. A little more thought and care in the kitchen would not go amiss. Perhaps it is early days and, in time, they will have mastered both meat and vegetables, but it may have been advisable to do that prior to opening a restaurant.