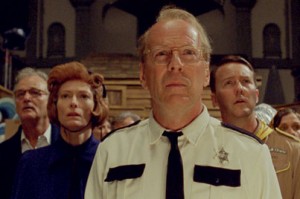 The return of Wes Anderson and the Men In Black, plus some rather unorthodox sporting competition. It’s all in another week’s work at South London’s best cinema.

After a positive critical reception following its recent premiere at the Cannes film festival, Wes Anderson’s long-awaited Moonrise Kingdom hits the Ritzy this week. Set in 1965, it focuses on a pair of young lovebirds who flee their New England island town, sparking a local search party comprising the Sheriff (Bruce Willis), the girl’s parents (Bill Murray, Frances McDormand) and the scout leader (Ed Norton) to go out and find them. Expect a painstakingly rendered, colour-infused aesthetic, arch humour, and an expertly curated retro soundtrack.

And guess who’s back? Yep, the Men In Black, in their third instalment (was the second one really 10 years ago?). This time Agent J (Will Smith) must travel back to the early days of the MIB in the 1960s to stop an evil alien from killing his partner K and thus irrevocably altering the course of history. Early buzz suggests that director Barry Sonnenfeld has refrained from attempting to reinvent the wheel, so it seems like the film’s success will be reliant on a healthy dollop of smart action and CGI, and the charismatic interplay of Smith and his old counterpart Tommy Lee Jones. Josh Brolin as the young TLJ looks like a neat bit of casting too.

The third new release is Lisa Aschan’s moody Swedish drama She Monkeys, which is all about the subtle psychological power struggles between two teenage girls engaged in – wait for it – equestrian vaulting. We’ve all been there. But seriously, this is an impressive, even disturbing feature debut that’s well worth your time.

On Friday and Saturday night, there’s the opportunity to catch Dario Argento’s baroque 1982 chiller Tenebrae. It’s a pretty lurid number about a murder mystery novelist who becomes entangled in the search for a serial killer inspired by his work. Originally banned as a ‘video nasty’ in the UK, it’s gone on to develop a cult following, and it’s easy to see why – it’s gripping and shocking. It also features an atmospheric, occasionally deafening score from regular Argento collaborators Goblin, which will no doubt be ringing in your ears as you wind down in KFC afterwards.

Should that not tickle your fancy, there’s also a chance (that should not be passed up) to catch Otto Preminger’s classic film noir Laura on the big screen. Starring Dana Andrews and Gene Tierney, it’s an elegant, twisty tale of death and desire.