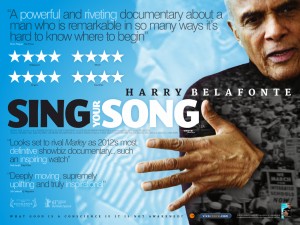 On Monday 4 June (Jubilee bank holiday), the Ritzy will be screening a special preview of ‘Sing Your Song‘, a biographical documentary of singer and activist Harry Belafonte.

Belafonte was blacklisted in the McCarthy era, fought in the Civil Rights Movement in the 1960s and was part of the struggle against apartheid in South Africa – he is now in his 80s and will be at the Ritzy for a Q&A and book signing after the screening.

For the chance to win a free pair of tickets to the screening, send your answer to the following question to info@brixtonblog.com.

With which album was Harry Belafonte the first artist in history to sell over one million LPs?

The competition closes at 12pm on Tuesday 29 May.

Sing Your Song is officially released in cinemas on June 8 and the trailer can be viewed here.