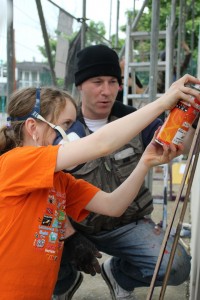 The London Mural Preservation Society (LMPS) and members of the public have this week been restoring the Brixton Windmill Mural on Lyham Road, painted by Mick Harrison and Caroline Thorp in the mid-1980s.

The original mural depicts the windmill, the only working mill in London, when it was built in 1816. The aim of the mural was to direct people coming to the windmill.

The restoration of the mural is the result of joint efforts by Ruth Miller of LMPS, Charlotte Bill of the Clapham Film Unit and  Vinnie O’Connell, who grew up around the corner from the mural.

O’Connell said: “Every day when this mural was painted 30 years ago, I used to pass by it and get chatting to the artist and I got involved a little with the painting of the mural. Over the years watching the weather beating it and the rain and the wind – and the sun is especially bad  – and it being tagged by local kids, I thought it such a shame”.

O’Connell got together with Ruth Miller and Charlotte Bill to discuss the idea of restoring the windmill mural and making a documentary about the project.

Unable to contact the original artists, the trio commissioned the restoration of the mural to Positive Arts, a community arts company based in Brixton.

“We are fusing the old style with the new”, said Julian Phethean, director of Positive Arts. “We kept the old composition but we’re changing the images inside. All the ideas come from the community.”

The official launch for the mural is on Saturday 5 June and a public street party on Lyham Rd is planned as part of the Jubilee celebrations.

LMAPS have blogged about the restoration of the mural here. 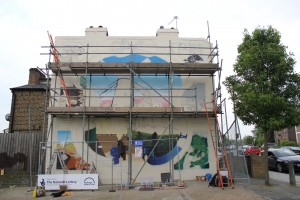