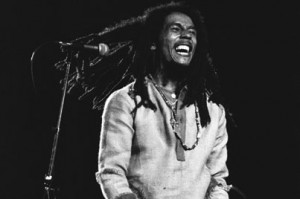 Kevin Macdonald’s Marley, released on Friday, plays out as a a cinematic love letter to the musician.

And who can argue after watching the charismatic footage and the interviews with those closest to him? I was similarly smitten from one of the earliest interviews, with Marley’s childhood singing teacher.

And to the director’s credit, for the most part, he doesn’t shy away from some of the more negative aspects of Marley’s character which we find so irreconcilable with the legend. For example, the musician’s treatment of women leaves a lot to be desired. He was very promiscuous to the point of having eleven children through seven different women.

One of the most poignant points in the film is when we see Rita Marley smile through her discussion of how his indiscretions didn’t bother her, only to be followed by her daughter say that although Rita tried to hide the hurt, it was still there.  Having said that, all of the women romantically involved with the musician still appear fairly giddy with delight to have known him at all.

The most powerful moment of the whole film was when the director separately invites Marley’s sister and cousin to listen to his song ‘Corner Stone’. He tells them how Marley wrote the song after being rejected by his father’s family. The emotion in their faces is both painful to watch and mesmerising. Despite Marley’s complex personality, it is hard not to be increasingly moved by his music as the film reveals the context behind it.

The main strength of the documentary is undoubtedly the candid nature of the interviews. The range of characters provide thoughtful and occasionally numerous insight into the icon.

It might have been interesting to hear from those with whom he had legal pursuits or even a sound bite from some of the children who he never saw. However, it is hard not to sympathise with the director’s devotion to the musician. Marley himself claimed he brought the “ghetto uptown” and it is this sentiment, achieved his through music and politics, which continues to resonate today.

Marley is on show at the Ritzy Cinema, Brixton Oval, from Friday.