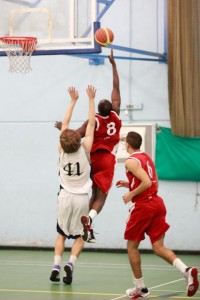 The Topcats showed no signs of their battle the previous evening as they raced out to a 28-21 lead in the first quarter. Tom Adorian did the damage early on as the hosts struggled to cope with Brixton’s size advantage.

Brixton continued to play excellent basketball in the second quarter as they edged on to a 47-37 point lead at half time. Captain Arturo Noha limped out of the game with a sprained ankle early in the quarter, and Horatio Kraus proved a more than able deputy from the bench. Demba Kasse and Sam Toluwase proved too strong and powerful for Leeds to contain, as Brixton were able to get high percentage shots around the basket to build their lead.

A high-scoring third quarter saw Brixton maintain their offensive fluency – but Leeds also started to show the quality of their long range shooting with Henry Wilkins connecting on 3 three point attempts in the space of a couple of minutes. Sam Toluwase moved up a couple of gears and began to take control of the scoring for Brixton on his way to a team high 32 points. After three quarters Brixton lead 73-63.

At this stage in the game, Brixton’s exertions at Derby the night before began to show. Leeds were able to secure a couple of offensive rebound and capitalise with scores. At the other end, Papa Demba Kasse fouled out of the game thanks to a very soft offensive foul. Turnovers and errors started to creep into Brixton’s game as the momentum shifted to Leeds. A David Ajumobi layup with six seconds to play tied the game up for Leeds. Brixton failed to score with the last offense of regular time, so the game headed into overtime – the second time in a week for Brixton.

Leeds took an early lead, but Brixton bounced right back and lead through most of the overtime period. A Sam Toluwase three-pointer moved Brixton four ahead with two minutes to play. A couple of Brixton turnovers then allowed Leeds to stay in it, and with seven seconds to play and Brixton up one, the Topcats
turned the ball over on an inbounds. Leeds missed the resulting shot, but Sam Toluwase grabbed the rebound for Brixton and was fouled with 1.6 seconds on the clock.

Brixton inbounded the ball under pressure, and a scramble for the ball saw Leeds come up with it. Josh Houghton tapped the ball loose, turned, took two dribbles and pulled up for a three-point attempt. Brixton – adamant that this sequence of events was not humanly possible in 1.6 seconds – stated their case to the referees who confirmed that it was possible, and called the shot as good.

Brixton Topcats out of the Trophy – by just one point